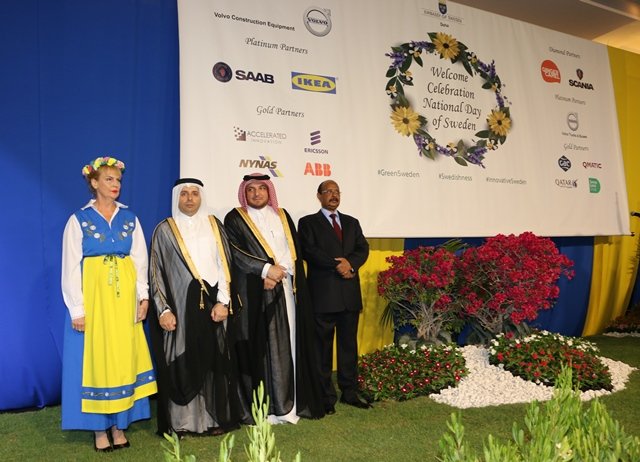 Ewa Polano, Ambassador of Sweden to Qatar announced today that a number of MOUs were in pipe line to be signed at the forthcoming meetings in Stockholm between Qatar and Sweden. She was addressing a press conference this afternoon on the occasion of Sweden National Day celebrations. Ambassador told that among MOUs to be signed include on Port-management, Education, Health, Urban-planning and Waste management.

She referred to the recent visit by Qatar Education Minister to Sweden and said that an MoU related to enhancing research and innovation cooperation between two countries was ready to be signed. ‘Our cooperation in education sector primarily revolves around spirit of engineering and innovation in which we are at number one in the world, ” she said.

Madam Ambassador of Sweden lauded on the strong relations between Qatar and her country and told that bilateral trade between both the countries was over one billion Euro, however, there is much capacity to increase in it. “There was some decline due to fall in oil prices but very soon it will again start growing, she told.

Later in evening at the official celebrations, Minister of Education and Higher Education Mohammed bin Abdul Wahid Al Hammadi was chief guest at the glittering event. The ambassador lauded Qatar’s vision of transformation from oil-based economy to knowledge-based society and diversified-economy.

“Sweden has already become a creative economy and Qatar’s vision makes both countries a perfect partner,” she added.

“Ashghal’s slogan is ‘Qatar deserves the best’ and Sweden is the best in world in technology, sustainable development, entrepreneurship, road safety etc.,” she said, adding Sweden was cooperating with Qatar in its endeavors to achieve goals set in Qatar National Vision 2030.

Earlier in press conference, Saman Naziri, General Manager – Middle East of Sensys Gatso said that his company’s pilot project of vehicle-mounted speed radars had been very successful. “We hope our ongoing negotiations with authorities will take a final shape and these systems will be deployed on traffic police vehicles in Qatar.

On the sideline of press conference, Naziri said that Sensys Gatso had provided 400 systems to France where authorities were using them in civilian vehicles to make speed enforcement campaign more effective. He said those vehicle-mounted cameras could also record images of number plates of violating vehicles.

Dr Prof. Niclas Adler from “Accelerated Innovation” said that under an agreement, likely to be signed soon, Sweden would offer entrepreneurship training to young Qatari nationals. “This cooperation with Qatar will be from the platform of Qatar Science and Technology Park,” he added.

Antonie Azor of Scania said that they had recently provided 32 buses to Qatar Petroleum for school use which were ‘environmentally friendly’.