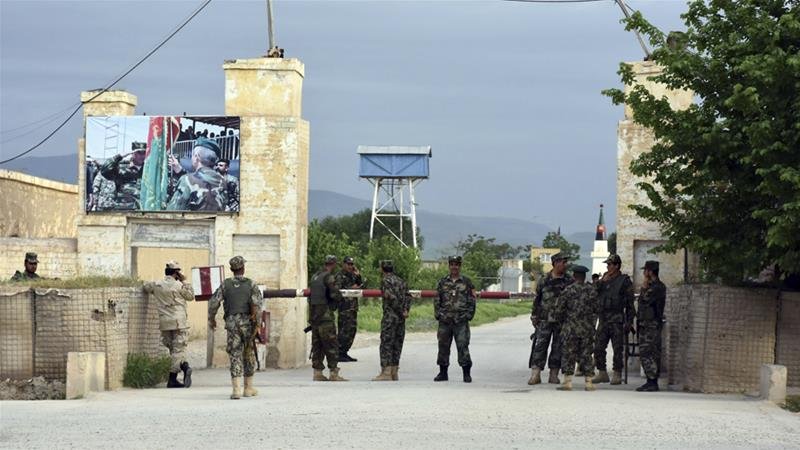 An Afghan official, speaking to Reuters news agency on condition of anonymity, said more than 50 soldiers had been killed and many others wounded at the military base near Mazar-i-Sharif, capital of Balkh province.

An American military official said the Taliban may have killed and wounded more than 50 Afghan troops.

The attack was launched near a mosque on the base as soldiers were leaving Friday prayers, said army spokesman Nasratullah Jamshidi.

Six attackers in two military vehicles told guards at the gates that they were carrying wounded soldiers and urgently needed to enter, he said.

“In total, there were 10 attackers involved in the attack on the Afghan army corps. Seven of them were killed, two blew themselves up, and one was detained by Afghan forces,” defence ministry spokesman Dawlat Waziri told AFP news agency.

The base is the headquarters of the Afghan National Army’s 209th Corps. It covers most of northern Afghanistan, including Kunduz province, which has been the scene of heavy fighting.

IN PICTURES: The Afghans on the frontlines fighting the Taliban

“We’re talking probably more than 50 casualties,” Thomas said, adding he was unaware of any US-led coalition forces who were directly involved.

“There is a mosque and a dining facility on the base that seemed to, at this point from our reports, be the subject of significant attack from enemy forces.”

Al Jazeera’s Rob McBride, reporting from the capital Kabul, said the assailants had been surrounded by Afghan commandos.

“The attack followed a familiar pattern with a suicide bomb ramming into the gates of the base and detonating. After that the attackers were able to get inside,” McBride reported, quoting an interior ministry statement.

“The attackers were heavily armed with suicide vests and automatic weapons, trying to cause as much damage as they can.”

“Our fighters have inflicted heavy casualties on the Afghan army stationed there,” he said.

The NATO command in Kabul called the attack “murderous and reprehensible”.

The Western-backed Afghan government is locked in a prolonged war with the Taliban, as well as other armed groups. The country has seen rising violence since the US-led invasion in October 2001 ousted the Taliban-led government.