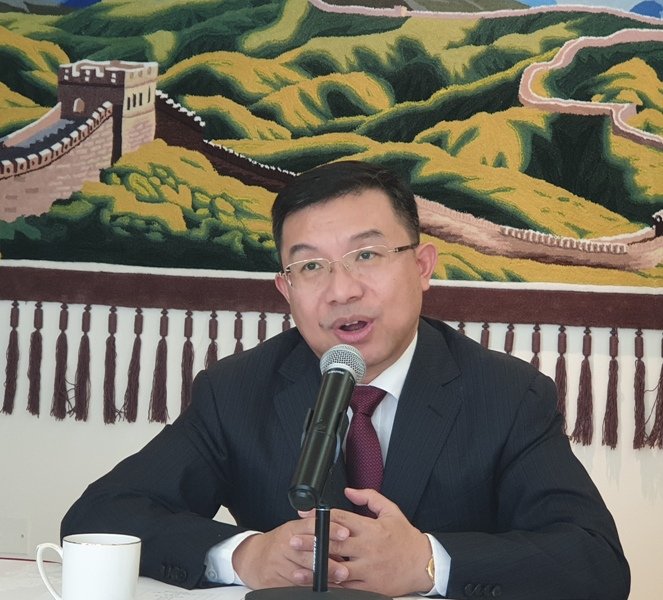 Exclusive interview with Chinese Envoy to State of Qatar, ambassador Zhou Jian on China’s decision for the continued operation of the 6th Legislative Council of Hong Kong

1. China’s National People’s Congress has made a decision for the 6th Legislative Council of Hong Kong to continue performing its duties. Could you introduce the details of the decision?

On July 28, Carrie Lam, Chief Executive of Hong Kong SAR submitted a report to the central government on matters concerning the postponement of the 2020 Legislative Council (LegCo) election, informing that in response to the emergencies brought by the recent COVID-19 epidemic in Hong Kong, the Chief Executive in Council has decided to postpone the election of the 7thterm LegCofor one year, which was originally scheduled for Sept. 6, 2020. The report has asked the central government to request the National People’s Congress (NPC) Standing Committee to make arrangements on the vacancy of the LegCo incurred due to the postponement.
On 8th August, the State Council presented a draft bill on behalf of the central government to Chinese lawmakers, requesting the NPC Standing Committee to make a decision for the 6th LegCo to continue operation and explained the bill to lawmakers at its21st session. Lawmakers then reviewed the bill and asserted Chief Executive of Hong Kong’sannouncement on the postponement of the LegCo election due to the current COVID-19 outbreak. As the legislative body of Hong Kong, the LegCoplays an important part in the political system and exercises the rightsto formulate, amend and abolish laws, review and approve important decision-makings such as budgets, taxes and public expenditures.In the case of vacancies in Hong Kong’s legislature, lawmakersof the Standing Committee agreed that it is imperative and proper for the NPC Standing Committee to make decisions on matters regarding the operation of 6th LegCo. The decision will be conducive to upholding the constitutional order and rule of law in the HKSAR, and to ensuring the region’s normal governance and functioning of the Hong Kong society.The decision is in conformity with the Constitution and the HKSAR Basic Law.
On 11th August, at the 21st session of the Standing Committee of the 13th National People’s Congress Chinese, lawmakers voted to adopt the decision for the 6th Legislative Council (LegCo) of Hong Kong SAR to continue performing its duties. According to the decision, after Sept. 30, 2020, the 6th LegCo will continue performing duties for no less than a year until the 7th LegCo is elected and starts its 4-year term.

2. The decision has drawn wide attention of the world. What is the consideration behind the above-mentioned decision?

The decision adopted by the NPC Standing Committee is in line with the actual conditions of the epidemic in Hong Kong, it will help safeguard public security and health of people, as well as the justice and fairness of the election. It is in line with the internationay practice by many countries of postponing elections in response to the pandemic. The decision is imperative andtimely, which serves public interests, and shows the Central Government’s strong sense of responsibility toward the overall interests of Hong Kong and the utmost concern for the vital interests of the people.
First, the decision has solid constitutional and legal basis. The HKSAR Chief Executive made the order to postpone the LegCo election in accordance with Hong Kong’s Emergency Regulations Ordinance. On the basis of this, the NPC Standing Committee made its decision on the operation of the 6th Legco according to the Constitution and the HKSAR Basic Law.It aimsto deal with the vacancy of the 7thLegCo at the constitutional level, which provides a legal ground for the continued operation of the 6thLegCo, helping to maintain constitutional order and the rule of law in Hong Kong, as well as ensuring the normal administration of SAR Government and the normal operation of local society.It reflects the Central Government’s basic principle of rule of law and is essential to the stability and prosperity of Hong Kong.
Second, it is necessary and proper. It falls in line with the actual conditions of the epidemic development in Hong Kong. Since the start of July, a new round of COVID-19 epidemic broke out in Hong Kong. The sudden and rapid spread of the virus poses severe challenges. Health experts have warned the risk of a major community outbreak is rising. Hong Kong’s public health system will be on the verge of collapse, if not responded and controlled in time. The rampant epidemic has a serious impact on the normal operation of the Leg Co election.
If the election were to be held, the large number of voters and the small space of polling stations will result in mass gathering, with high risks of cross infection. Also, as a part of the SAR government’s health measures prohibiting the gathering of more than 2 people, it would be hard for candidates to hold election campaigns. Furthermore, according to statistics, there are 527,000 Hong Kong residents staying in the Mainland for the past 3 months, while another tens of thousands stranded overseas. It is very difficult for them to return to Hong Kong on the polling day because of the epidemic. Additionally, there are more than 600,000 elderly voters over the age of 71, who are likely to abstain from voting for health concerns.Many political groups, social organizations and public figures think that if the election is held as scheduled, it will not only be difficult to ensure fairness and openness, but will also increase the risks of infections, endangering the health and safety of voters, supporters and polling staff. They have been urging the government to follow other countries’ practice and postpone the LegCo election.
Facing the current circumstances, the decision to postpone the election and the continued operation of 6thLegCo demonstrates the sense of responsibility to protect the security and health of Hong Kong residents. It is conducive to safeguarding public security and ensuring fairness and justice in the LegCo election. It will minimize social instability and enable the whole society to focus on the most pressing task of curbing the epidemic. I wish to emphasize that as the epidemic in Hong Kong remains challenging, Hong Kong residents are eagerly awaiting an early victory over the epidemic, a gradual restoration of order, and a better relief of their difficulties. We are confident that with the firm support of the Central Government, and the joint efforts of the Hong Kong SAR government and all sectors of society, we will win the battle against the new outbreak soon.

Hong Kong is part of China’s territory, and Hong Kong affairs fall within China’s internal affairs. Recently, western politicians have been hyping up and attacking China’s national security law in Hong Kong, introducing so-called Hong Kong bills, and announcing sanctions on Chinese government officials in charge of Hong Kong affairs. This is a blatant interference in China’s domestic affairs, an act of hegemony and a gross violation of international law and basic norms of international relations.

I would like to stress that the Chinese government is firm in its determination to safeguard China’s sovereignty, security and development interests, to implement the principle of “one country, two systems” and to oppose any external interference in Hong Kong affairs. We firmly reject any party to meddle in Hong Kong affairs, and will not allow the US and other foreign forces to use Hong Kong to carry out their infiltration and subversion against China.