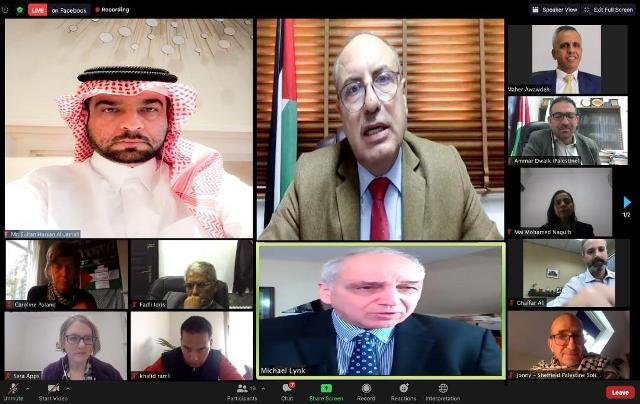 The Arab Network for National Human Rights Institutions with it’s headquarters in Doha organized a symposium marking solidarity on world level with the Palestinian People, as per UN 1977 resolution declaring  29th November each year as international solidarity day with Palestinians.

The symposium was attended by a wide range of national human rights institutions in the Arab Network, in addition to the participation of the United Nation represented by the Special Rapporteur on the Occupied Palestinian Territories.

The day was remembered as Friends of Palestine, the Center for the Defense of Freedoms and Civil Rights “Hurriyat” in Palestine and the University of Quito, in addition to the participation of the Palestinian Ministry of Foreign Affairs, participating in the symposium.

Issam Yunus, President,  Arab Network of National Human Rights Institutions, described in its current session the International Day of Solidarity with the Palestinian People as coming to emphasize the set of basic issues related to the Palestinian cause and also to confirm that the Palestinian cause expresses genuine and inalienable rights, foremost of which is the right to Self-determination and in return.

In his opening speech, Yunus said: The process of empowering the Palestinian people of their basic rights is one of the tasks of the international community, led by the Arab countries that are considered an integral part of the issue.

He said that but we now find the international community far from it’s moral duties. He pointed out that this year comes in light of a situation that is the most dangerous for the Palestinian issue due to the encroachment on the rights of the Palestinians and the creation of new facts unilaterally.

He said that in addition, settlement activity is the most dangerous crime being committed and is still practiced by the occupying forces. Inspite of in the knowledge of the world, the world has not moved to put an end to the expansionist policy, declaring Capital city on occupied land, thus violating international laws and the the rights of the Palestinian people. Severe human rights violations are war crimes against humanity and the occupied forces be accountable on their in-human crimes

Sultan bin Hassan Al-Jamali, Executive Director of the Arab Network, explained that the official Arab regimes are in a crisis that affected human rights in Palestine, and al-Jamali called on the Arab nation to wake up and rely on oneself by starting to limit Arab concessions and stop normalizing the relations.

He said that in present situation of illegal demolishing of Palestinians houses, expansion by the occupied forces are open violation of human rights of the Palestinians, it is no justification of any concessions and it is violating of international law by these countries, he added.

Sultan AlJamali said this seminar came at a time when the Palestinian issue is going through lack of political solution, ongoing annexation of Palestinian land and the US administration’s attempts to liquidate the Palestinian issue are heading towards more complex of issue. He stressed on the world body to boycott completely and to isolate and force the occupied forces to implement international body decisions.

He said the silence of Arab countries and the media has threatened the basic rights of Muslims and the Christian communities on occupied Arab land.  led to the melting of rights day after day, and led to the development of Christian and Islamic rights in The occupied Arab lands are at stake.  He said that human rights bodies in Arab world can play their role by implementing on established international human rights, standing for right of  self-determination and the basic rights to the Palestinian Arab people. He said that there is need for independent commission for Human Rights to make it’s report.

Michael Link, the UN Special Rapporteur on the Occupied Palestinian Territories presented an intervention on accountability for the occupation crimes.

The symposium called on governments and civil society in Arab countries to provide the necessary support To re-inforce the legal move.