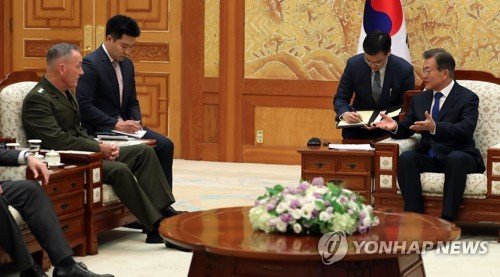 South Korean President Moon Jae-in said Tuesday that the country will expand its diplomatic efforts to peacefully resolve North Korea’s nuclear and missile issues, vowing to prevent a war from breaking out on the Korean Peninsula.

“The government will prevent a war at all cost. We must peacefully resolve the North Korean nuclear issue no matter how many ups and downs there are,” Moon said in a ceremony marking the 72nd anniversary of the country’s liberation from the 1910-1945 Japanese colonial rule.

“The government will further step up its diplomatic efforts to make sure the international community’s principle of peaceful resolution of the North Korean nuclear issue will not waiver,” he added.

Moon’s remarks come amid escalating tension between the United States and the North that many here believe may lead to the outbreak of armed conflict if not an all-out war.

Pyongyang says it is considering staging a missile exercise around the U.S.-controlled island of Guam that is viewed as a clear and direct threat to the United States.

Washington has warned that it can move to counter Pyongyang’s threats militarily, with U.S. President Donald Trump going a step further saying the option to use force is “locked and loaded” and ready for implementation.

Still, the South Korean leader said his country will also enhance its own defense capabilities to ensure peace.

“At the same time, we will keep our doors open for military dialogue to make sure the military tension between the South and the North will not worsen,” the president said.

He repeated his call on the communist North to halt its provocations and return to the dialogue table.

“North Korea must remember that when it suspended its missile tests or declared a suspension to nuclear tests was when the North-South Korean relations were at their best. That was when North Korea-U.S., North Korea-Japan talks were promoted and multilateral diplomacy in the Northeast Asian region flourished,” Moon said.

“The resolution of the North Korean nuclear issue must start from a nuclear freeze. North Korea must at least halt its nuclear and missile provocations before conditions for dialogue can be created,” he added.

He said his country will help ensure the economic development of the North, as well as the safety of its communist regime, should the impoverished nation choose the right path.

“I once again clarify. We do not want North Korea’s collapse. We will not pursue reunification by absorption nor seek any type of artificial unification.”

“Should North Korea continue down this path, there will only be isolation and a dark future for the North. We, too, cannot but increase our sanctions and pressure against the North even if we do not wish to,” he said.

He also urged other countries in Northeast Asia, including Japan, to join efforts in institutionalizing regional security and economic cooperation.