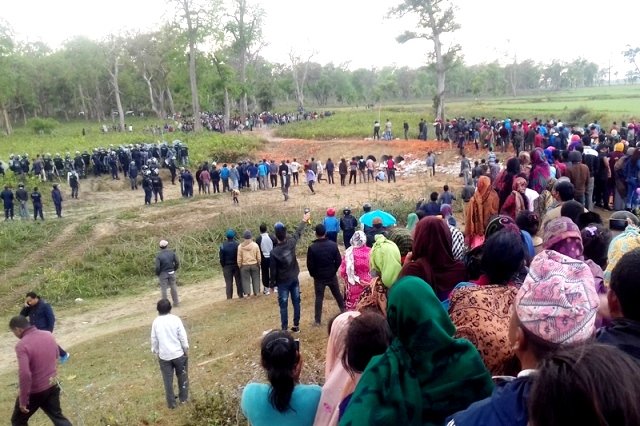 Indian & Nepalese media widely covered death of a Nepali youth 20 years old Govinda Gautam from the firings of Indian Armed Border Force (Sashastra Seema Bal, SSB). Govinda Gautam was shot on back in Kanchanpur (Nepal) during a confrontation between Nepalis and Indians on the construction of a recently built culvert by the Nepalese in Indian-Nepal border area.

Indian Armed Border Force troops had entered the Nepali side up to around 800 metres, according to locals, whereas, Indians claiming incident occurred on No-man land.

Local residents also accused the SSB personnel of manhandling Nepalese citizens living in the border areas and shutting the border.

Govinda Gautam of Purnabas Municipality-8 was injured from a bullet shot and died while being treated at Seti Zonal Hospital in Dhangadhi city hospital in Kailali District. Dr. Chandra Prakash Pandey informed that Gautam was shot in the back and had died during the surgery.

According to media reports, two Nepali police personnel and around a dozen Nepalis were also injured in the incident as referred to DIG Rubindra Deuja, one still in critical situation. Protesters had hurled stones at Armed Police Force (APF) and Inspector Ram Bahadur Khatri was injured too.

Ajit Doval, Indian National Security Adviser on behalf of Prime Minister Modi telephoned Nepalese Prime Minister Prachanda today on Friday and condoled on the death of Govinda Gautam in alleged firing by Indian Armed Border Force. Doval promised a probe into the incident that has sparked anger in Nepal.

Meanwhile, Indian Charge d’ Affairs in Khatmandu during a meeting in Nepal Ministry of Foreign Afairs had asked Nepalese authorities should maintain close and regular contacts and ensure law and order in the area.

The Government of Nepal is being requested through diplomatic channels to share post-mortem and forensic reports to facilitate the process. Doval conveyed Modi’s grief over the death and expressed condolences to the bereaved family, a statement issued by the Nepalese Prime Minister’s Secretariat said.

Prachanda, expressing Nepal’s readiness to provide the required support for the investigation, said the Kanchanpur incident was “very serious”. He expressed hope that the guilty would be booked after necessary investigation.

The deceased has been declared as a martyr by the Nepal government.

Nepal government has declared Gautam as a martyr, according to Deputy Prime Minister and Home Minister Bimalendra Nidhi. Along with martyr’s status, the government will provide Rs one million compensation to the next of the kin of the victim and fund the education of his children, said Nidhi while addressing the Legislature-Parliament meeting today.

Meanwhile, infuriated youths in Kathmandu protested outside the Prime Minister’s official residence in Baluwatar and the Indian Embassy in Lazimpat condemning incident.

Nepalis had built the culvert a month ago.