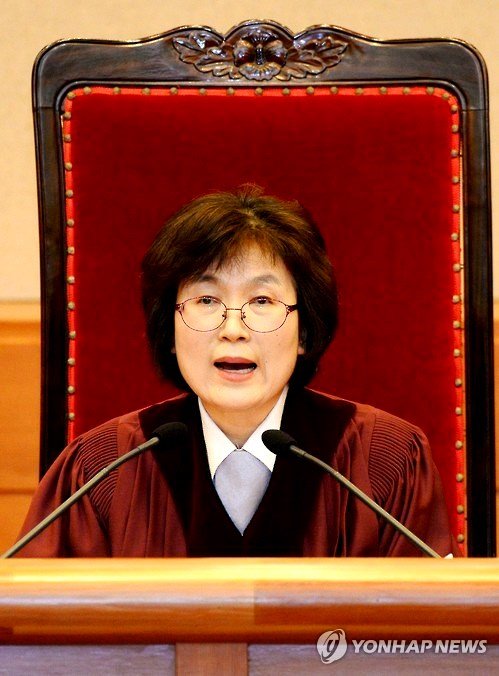 The Constitutional Court unanimously upheld the impeachment of President Park Geun-hye today on Friday, removing her from office after a 92-day leadership crisis and triggering a presidential election in the weeks to come.

The ruling, which was announced by the court’s acting chief and televised live, made Park the nation’s first democratically elected leader to be ousted.

“The negative effects of the president’s actions and their repercussions are grave, and the benefits to defending the Constitution by removing her from office are overwhelmingly large,” acting Chief Justice Lee Jung-mi said in delivering the ruling that lasted about 20 minutes.

Park was impeached by parliament on Dec. 9 on charges of letting a close friend meddle in state affairs, colluding with her to extort money from conglomerates, and neglecting her duties during a 2014 ferry sinking that killed more than 300.

An election to pick her successor must be held within 60 days and many expect it to fall on May 9.

Of the charges brought against the former president, the court acknowledged the illegality of Park’s actions in letting Choi Soon-sil handle state affairs. It dismissed the others, such as her abuse of power to appoint government officials, citing a lack of evidence. On Park’s alleged neglect of duty during the ferry sinking, Lee said the charge did not warrant deliberation by the court.

In the ruling, approved by all eight justices, the court accused Park of “thoroughly hiding” Choi’s involvement in government affairs, saying she not only denied the suspicions but was also critical of them.

Park helped her friend of 40 years pursue personal gains by supporting the establishment of various companies under Choi’s control and “continuously” violated the law and Constitution throughout her term, it said.

“Judging from the series of words and actions (Park has made), there is no will to defend the Constitution,” Lee said. “The president’s violations of the Constitution and the law amount to a betrayal of the people’s trust and are grave actions that cannot be tolerated from the perspective of defending the Constitution.”

There was no immediate comment from the presidential office.

But an aide to the former president told Yonhap News Agency the presidential office is “in talks over the future course of action.”

Acting President and Prime Minister Hwang Kyo-ahn made phone calls to Cabinet ministers to urge them to stay alert at a time of national emergency. He especially told Defense Minister Han Min-koo to strengthen military readiness to deter possible provocations from North Korea.

Hwang has convened a Cabinet meeting and will later hold a session of the National Security Council to discuss diplomatic and security challenges facing the nation. He is also expected to issue a statement to the nation.

Park’s Liberty Korea Party apologized to the nation as it accepted the court’s decision.

“The Liberty Korea Party gave birth to the Park Geun-hye government. It was a ruling party and the partner of state affairs,” said In Myung-jin, the party’s interim head. “But we failed to fulfill our duty as the ruling party, and failed to protect the dignity and pride of South Korea, which has been built by the people.”

The main opposition Democratic Party called for an immediate suspension of Park’s policies, a recovery of constitutional values and normalization of state affairs.

The minor People’s Party called the court’s decision a victory by the people, while the Bareun Party, which spun off from the Liberty Korea Party in the wake of the scandal, called on political circles to accept the ruling for the sake of national unity.

The United States also reacted to the news, saying through a State Department spokesman it will continue to be a “steadfast ally” of South Korea and “look forward to a productive relationship with whomever the people of South Korea elect to be their next president.”

The nation has been sharply divided along ideological and generational lines since the scandal broke in October, pushing millions of people into the streets to rally for or against the impeachment.

Liberal politicians have tapped into voter disappointment with calls for a change of administration after nearly 10 years of conservative rule. Former opposition leader Moon Jae-in, who lost to Park in the 2012 election, has been leading presidential opinion polls with approval ratings of over 30 percent.

The conservative bloc, meanwhile, has so far failed to field a candidate with a double digit approval rating, with the exception of the acting president, who has yet to formally join the race.

“We have undergone a process of resolving considerable conflict and differences in a predictable manner through legal procedures stipulated in the Constitution,” said Park Myoung-kyu, a sociology professor at Seoul National University. “Now is the time to calm down and turn (the conflict) into policy debates and arguments.”

The president’s supporters and detractors rallied outside the court and in nearby Gwanghwamun Square as police officers and police buses were deployed to prevent a possible clash.

The rallies grew heated after the ruling’s announcement and two pro-Park protesters died from their injuries, while several others were wounded, police said.

The court’s decision strips Park of her immunity from criminal prosecution, which will force her to undergo interrogation by prosecutors over her alleged crimes.

Two people who were injured while participating in an outdoor rally to oppose the Constitutional Court’s decision to dismiss President Park Geun-hye died Friday, police said.

One of the deceased is a 72-year-old man, identified only by his last name Kim, who was found bleeding from his head near the Constitutional Court in central Seoul at around 1 p.m. He was rushed to a nearby hospital but was pronounced dead there.

Police said they are investigating the details of the incidents. Earlier in the day, the court ruled to permanently oust Park from her office.