N. Korea-U.S. Summit Will be Held as Scheduled Despite Tensions: Seoul Official 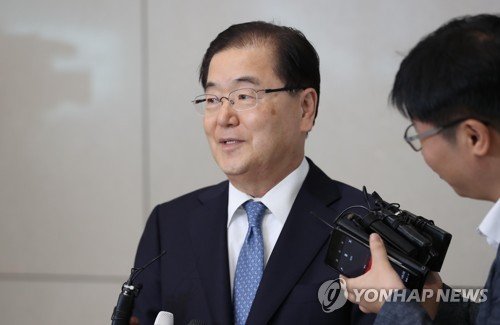 The upcoming summit between North Korea and the United States will go on as scheduled despite fresh tensions on the Korean Peninsula, Seoul’s top security official said here Monday.

Chung Eui-yong, chief of the presidential National Security Office, made the remarks aboard Air Force One bound for Washington, where President Moon Jae-in is to hold a summit with U.S. President Donald Trump on Tuesday.

“We believe there is a 99.9 percent chance the North Korea-U.S. summit (set for June 12 in Singapore) will be held as scheduled,” Chung told reporters. “But we’re just preparing for many different possibilities.”

North Korea has recently ratcheted up its criticism of both Seoul and Washington over the allies’ joint military exercise. The North has threatened to reconsider holding its first-ever summit with the United States and also suspended its high-level dialogue with Seoul originally set for last week.

Asked about the North’s increasingly belligerent rhetoric, Chung said, “We’re trying to understand the situation from the North’s perspective.”

As for the Moon-Trump summit, Chung said the two leaders will have “candid discussions on how to make the North-U.S. summit a success and produce significant agreements and how to best implement those agreements.”

“South Korea and the U.S. have been sharing every bit of information and have remained in close coordination with each other,” Chung added. “We’ve had various working-level discussions on how to steer North Korea in a direction that we want, and I expect (Moon and Trump) will have great talks this time.”

Chung rejected a recent New York Times article that said, citing administration and foreign officials. Trump had begun pressing his aides about whether going ahead with the summit with Kim Jong-un was worth the risk.

“During phone calls between our two leaders or talks between our National Security Councils, I never got such an impression,” Chung said.