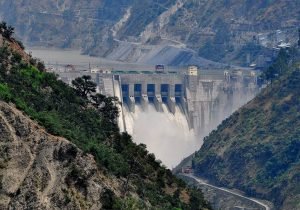 The 330-megawatt Kisha­nganga hydropower station is one of the projects that India has fast-tracked in the disputed Himalayan region amid frosty ties between the two countries.

“This region cannot only become self-sufficient in power but also produce for other regions of the country,” Modi said in Srinagar. “Keeping that in mind we have been working on various projects here in the past four years.”

Pakistan has opposed some of these projects, saying they violate a World Bank-mediated treaty on the sharing of waters from the Indus and its tributaries upon which 80 per cent of its irrigated agriculture depends.

“Pakistan is seriously concerned about the inauguration [of the Kishan­ganga plant],” its foreign ministry said in a statement on Friday. Modi, who was on a daylong visit to the region, also flagged off the construction of the 14-kilometre-long Zojila tunnel, which would provide all-weather connectivity between the cities of Srinagar, Kargil and Leh.

The government said it would be the longest road tunnel in India and Asia’s longest two-way tunnel, to be constructed at a cost of $1 billion.

India-held Kashmir, meanwhile, came to a virtual standstill as groups opposed to Indian control over the region called for a shutdown to protest Modi’s visit.

Shops shut and streets in Srinagar were empty except for police and paramilitary patrols as authorities imposed maximum security for the one-day visit.

Authorities cut mobile internet services in the disputed region and ordered a curfew in parts of Srinagar.

They closed schools, colleges and universities for the day to stop any student protest. The main venue for Modi’s visit to Srinagar, the Dal Lake tourist attraction, was declared out of bounds for the public.