Philippines: Flyover Collapses in Cavite, No One Hurt 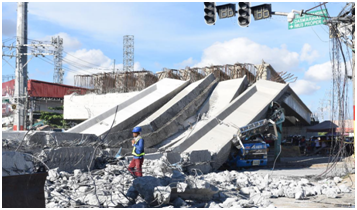 A portion of the Imus Flyover under construction, which spans the Daang Hari and Aguinaldo Highway just next to the Ayala District Mall here, collapsed early Sunday morning.

The Imus Disaster Risk Reduction and Management Office (IDRRMO) reported that no one was hurt in the incident although the collapsed beams pinned down the project contractor’s gilder beam truck, another heavy equipment and a motorcycle.

According to a witness, 51-year-old fisherman Mang Anselmo, he was driving his tricycle loaded with fish for delivery to the public market about 30 minutes past midnight of Saturday, when the beam structures of the flyover under construction collapsed.

“It was a miracle, thankfully there was a traffic enforcer who directed motorists and passersby not to cross the area, otherwise, they would have been crushed to death by the collapsing bridge and it sounded like an explosion,” Mang Anselmo said, adding that there was a commotion and people near the area were shouting.

Other witnesses said the drivers of the two trailer trucks under the flyover construction site were quick to scamper to safety as the beams gave way.

Construction workers of JBL Builders, one of the Cavite-Laguna Expressway (CALAX) contractors, told the Philippine News Agency that around 12:30 a.m. on Sunday, they were placing and lifting the portion of the beams using the crane to be connected to the supporting concrete column when the beams suddenly detached one by one and fell to the ground.

The incident also caused heavy traffic in the area as the Imus City Traffic Management Team diverted the Manila to Dasmariñas, Tagaytay, Silang, General Trias and Batangas-bound vehicles to DC Ilano Boulevard and other side streets due to the collapsed structures and concrete debris scattered all over the highway.

The Cavite police, local construction engineers, officials, and ambulances were on standby as city traffic enforcers supervised the traffic.

Meanwhile, Department of Public Works and Highways (DPWH)-Cavite South Engineering District Engr. Sagosaya Capal said they had dispatched additional workers and brought in five girders and cranes to the site to help in the speedy relocation of the disconnected concrete parts of the highway.

He said initial findings showed that the girder truck gave way as construction workers using the crane were lifting the fifth and sixth concrete cemented portion to be connected to the flyover, thus triggering the beams to collapse.

He added that the JBL workers are now fixing the collapsed structures as bulldozers swept through the scattered concrete debris and clear the highway.

The Imus local crisis management team also assured that the contractor and DPWH teams would be able to clear the debris spilled into the highway so that the area would be passable to traffic by Monday morning.

The Imus City flyover is part of the four-lane, 45.292-kilometer Cavite-Laguna Expressway (CALAX) which spans from the CAVITEX in Kawit, Cavite to the South Luzon Expressway (SLEX)-Mamplasan Interchange in Biñan City, Laguna.