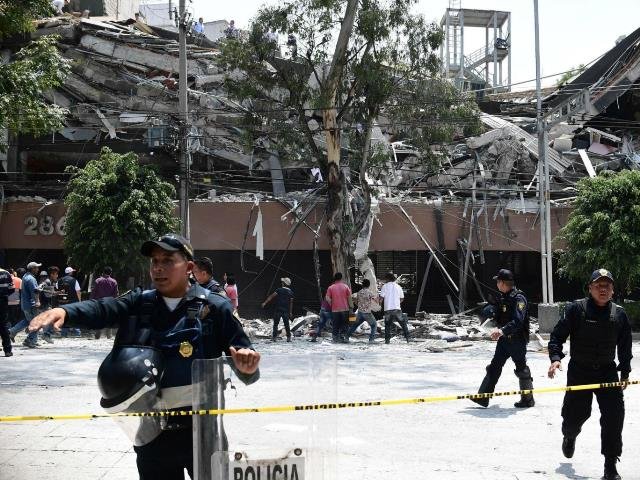 A powerful 7.1 magnitude earthquake has killed at least 93 people in central Mexico, according to officials.

The tremor on Tuesday struck eight kilometres southeast of Atencingo in the central state of Puebla, some 120km from the capital, Mexico City, the US Geological Survey (USGS) said.

The governor of Puebla, where the epicentre of the earthquake struck, said at least 26 people died in his state.

At least four people were killed in the country’s capital, while nine people were left dead in the state of Mexico, officials said.

The capital’s international airport suspended operations and was checking facilities for any damage.

Clouds of dust rose from fallen pieces of facades in Mexico City, and local TV footage and social media purportedly showed some buildings with severe damage.

Rescue workers and residents dug through the rubble of collapsed buildings seeking survivors.

At one site in the Mexico City neighrbourhood of Roma, rescue workers cheered as they brought a woman alive from what remained of a toppled building.

Local media broadcast video of whitecap waves churning the city’s normally placid canals of Xochimilco as boats bobbled up and down.

Al Jazeera journalist Ali Rae, who was in Mexico City when the earthquake struck, said: “The building I was in began to sway back and forth. As the waves got stronger, the shelves began to empty and a glass cabinet fell nearby.

“My friend and I were in a bit of shock. My legs felt like jelly as we left the building to join others outside. While it was a bit of a scare for us – we were completely fine compared to other parts of the city hit a lot worse.”

The worst earthquake in the history of Mexico occurred on September 19, 1985, killing nearly 10,000 people.

Mexico City was among the places that were seriously affected.