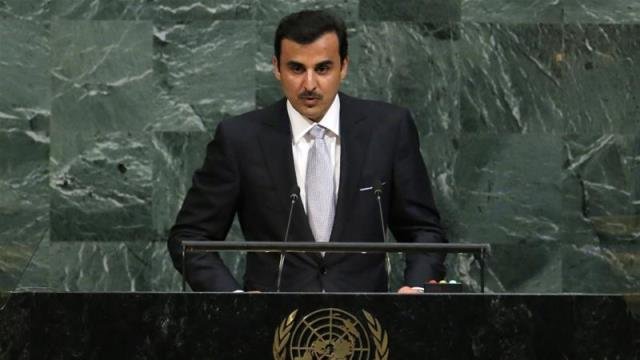 Sheikh Tamim bin Hamad Al Thani, Emir of State of Qatar has said that a group of Arab countries imposing an “unjust blockade” on Qatar are seeking to destabilise a sovereign state.

Saudi Arabia, the United Arab Emirates (UAE), Egypt and Bahrain cut ties with Qatar and imposed a land, air and sea blockade against it, accusing Doha of supporting “terrorism”. Qatar has strongly and repeatedly denied the allegation.

“I stand before you while my country and my people are subjected to an ongoing and unjust blockade imposed since June 5 by neighbouring countries,” Sheikh Tamim said, addressing the UN General Assembly in New York on Tuesday.

He asked if this what not a definition of “terrorism”, saying that the moves by the blockading countries were an assault against a sovereign state and a violation against human rights.

“The countries who imposed the blockade on the state of Qatar interfere in the internal affairs of many countries, and accuse all those who oppose them domestically and abroad with terrorism. By doing they are inflicting damage on the war on terror,” said the emir of Qatar, which is home to the largest US military base in the Middle East.

“We have refused to yield to dictations by pressure and siege.”

Sheikh Tamim also renewed a call for dialogue to end the Gulf’s worst diplomatic crisis, saying his country is open to resolving the dispute through talks without preconditions.

He said “an unconditional dialogue based on mutual respect for sovereignty” was needed.

On international matters, Sheikh Tamim called on Myanmar’s government “to stop violence against Rohingya minority” and appealed to Palestinians to complete their “national reconciliation”.

He also said Israel continues to impede a full and lasting peace by rejecting the Arab peace initiative of 2002 and by continuing its settlement policies in occupied territories.