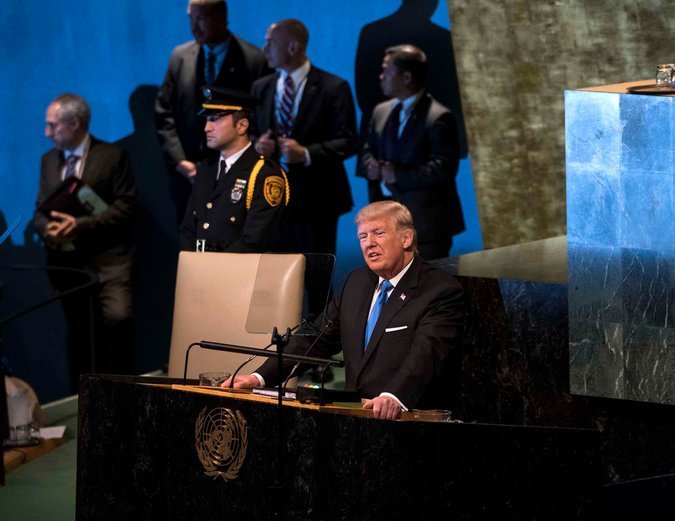 Leaders from around the globe took the lectern at the United Nations General Assembly on Tuesday — a particularly big moment for President Trump, who addressed the gathering for the first time.

In his speech, Mr. Trump vowed to “totally destroy” North Korea if it threatened the United States or its allies. “If the righteous many don’t confront the wicked few, then evil will triumph,” he said.

He also called Iran a “rogue nation” and said the United States was “prepared to take further action” on Venezuela.

President Emmanuel Macron of France countered those remarks in his own address, saying that the nuclear deal with Iran was “essential for peace” and that his country would “not close any door to dialogue” with North Korea.

Prime Minister Benjamin Netanyahu of Israel agreed with Mr. Trump’s assessment of Iran, however, saying, “Imagine the danger of hundreds of nuclear weapons in the reins of a vast Iranian empire, with the missiles to deliver them anywhere on Earth.”

If the United States is forced to defend itself or its allies, “we will have no choice but to totally destroy North Korea,” President Trump said in his address to the General Assembly.

He denounced North Korea and its leader, Kim Jong-un, saying the nation “threatens the entire world with unthinkable loss of life” as a result of its nuclear weapons program.

“If the righteous many don’t confront the wicked few, then evil will triumph,” Mr. Trump said.

Mr. Trump emphasized that it was against the interest of the entire world for North Korea — which he called a “band of criminals” — to obtain missiles and nuclear weapons.

“Rocket man is on a suicide mission for himself,” he said of Mr. Kim.

Mr. Trump accused Mr. Kim of overseeing a regime that has starved its people, brutalized an imprisoned American college student who was returned home in a coma, and assassinated Mr. Kim’s older brother, a potential rival, with poison chemicals.

“If this is not twisted enough, now North Korea’s reckless pursuit of missiles and nuclear weapons threatens the entire world,” Mr. Trump said.

While he thanked Russia and China for supporting recent United Nations sanctions on North Korea, Mr. Trump also took an indirect swipe at them for continuing to do business with Mr. Kim.

“It is an outrage that some nations would not only trade with such a regime, but would arm, supply and financially support a country that imperils the world,” Mr. Trump said.

The president said that America would act alone if needed. He emphasized an “America first” agenda, and said that while the United States would “forever be a great friend to the world and especially to its allies,” his primary responsibility was to Americans.

He called the Iran nuclear deal “an embarrassment” that is “one of the worst and most one-sided transactions the United States has ever entered into.”

Mr. Trump has long portrayed Iran as a sponsor of terrorism and has suggested that the United States may abandon the 2015 deal negotiated by the Obama administration and five other major powers that limited Iran’s nuclear activities. So far Mr. Trump has grudgingly accepted the nuclear agreement despite having described it as a disgrace.

“It is time for the entire world to join us in demanding that Iran’s government end its pursuit of death and destruction,” he said.

The world’s nuclear inspectors recently declared that they had found no evidence that Iran is breaching the agreement. A meeting of the parties that negotiated the deal with Iran — Britain, China, France, Germany, Russia and the United States — will take place on the sidelines of the General Assembly on Wednesday.

“The Iranian government masks a corrupt dictatorship behind the false guise of a democracy,” Mr. Trump told the United Nations on Tuesday. “It has turned a wealthy country with a rich history and culture into an economically depleted rogue state whose exports are violence, bloodshed and chaos.”

Mr. Trump also called on the Iranian authorities to free the American citizens being held in Iranian prisons. At least four are incarcerated, and a fifth has been missing for a decade.