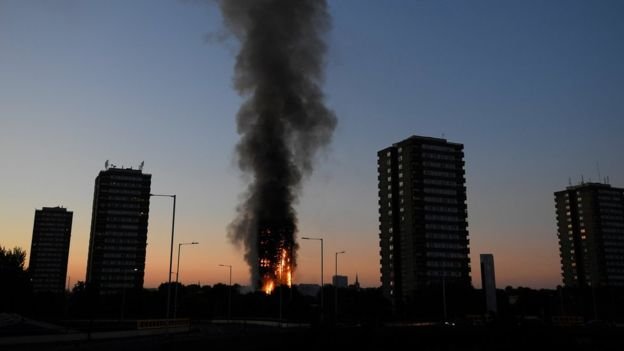 A huge fire has broken out at a block of flats at Lancaster West Estate, in the Latimer Road area of West London, police and firefighters have said according to BBC News.

Eyewitnesses described people trapped in the burning Grenfell Tower, in north Kensington, screaming for help and yelling for their children to be saved.

Firefighters rescued many people and are still trying to put the fire out in the 24-storey block 12 hours on.

Police say there may still be people in the building who are unaccounted for.

During the night, eyewitnesses said they saw lights – thought to be mobile phones or torches – flashing at the top of the block of flats, and trapped residents coming to their windows – some holding children.

It is understood that “several hundred” people would have been in the block when the fire broke out shortly after midnight, most of them sleeping.

Commander Stuart Cundy, of the Metropolitan Police, said the recovery operation would be “complex and lengthy”, and the number of fatalities was expected to rise.

He declined to give any details of the number of people who may be missing.

He said it was likely to be some time before police could identify the victims, adding that it was too early to speculate on the cause of the fire.

An emergency number has been set up on 0800 0961 233 for anyone concerned about friends or family.

More than 70 people have received treatment in hospital. At least 20 are known to be in a critical condition.

By mid-morning, the building looked to be just smoking ruins but the fire has again taken hold, and cladding is falling to the ground.

Prime Minister Theresa May is “deeply saddened by the tragic loss of life”, said Downing Street.

Later, Police and Fire Minister Nick Hurd will chair a cross-party meeting to look at how the government can assist the emergency services and local authorities.

Grenfell Tower underwent a two-year £10m refurbishment as part of a wider transformation of the estate, that was completed last year.

The 24-storey tower, containing about 120 flats, is managed by the Kensington and Chelsea Tenant Management Organisation (KCTMO) on behalf of the council.

Before and during the refurbishment, the local Grenfell Action Group claimed that the block constituted a fire risk and residents warned that site access for emergency vehicles was “severely restricted”.

Construction firm Rydon, which carried out the refurbishment, said it was “shocked to hear of the devastating fire” and added that the work “met all required building control, fire regulation and health and safety standards”.

Council leader Nick Paget-Brown said the buildings were regularly inspected, but a “thorough investigation” was needed.