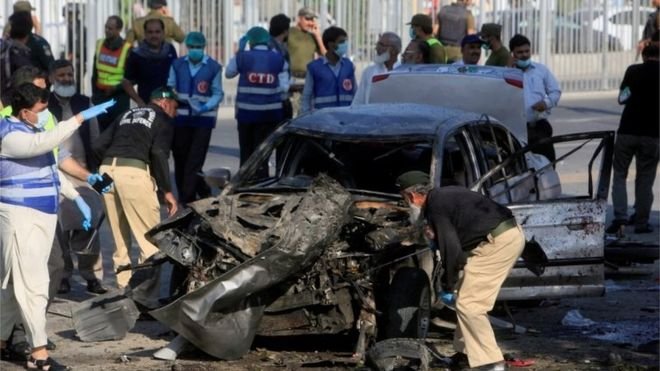 At least 26 people killed and more than 50 injured in a car bomb blast in second biggest city of Lahore of Pakistan, media reports quoted officials reference.

The Pakistani Taliban said it was behind the explosion.

According to the various media conflicting news, either it was a suicide bomber on a motorbike or a bomb was hide in a motorbike.

The market was full of police at the time because officers had been sent to clear stalls that had illegally spilled into the road.

Haider Ashraf, Lahore police operations Chief is quoted saying “We suspect that he (the suicide bomber) came on a motorcycle and he rammed it into a police checkpoint,” Haider Ashraf told while speaking with Reuters.

Rescue workers have transferred the wounded to hospital, and police and army troops were sent to contain the scene.

Pakistan’s president, prime minister and army chief have all expressed their sorrow and condolences for the loss of life.

It is the latest in a series of explosions in Lahore in recent months.
In April, the Pakistani Taliban said they had carried out an attack on workers conducting a government census.
A Taliban faction said it was behind a bomb attack in Lahore in February which killed 13 people and wounded more than 80.

The Pakistani Taliban is loosely allied with Afghanistan’s Taliban insurgents, but targets the Pakistani government.