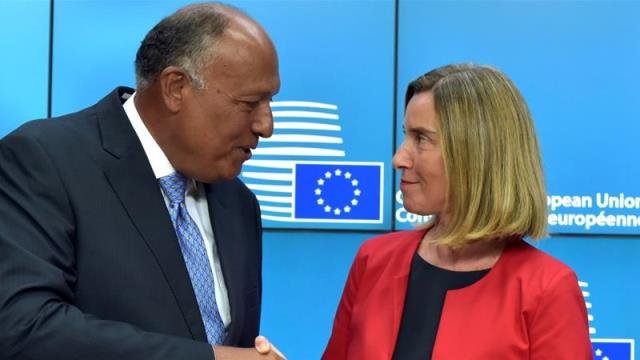 Egypt has said that the four Arab states will accept no compromise in their dispute with Qatar over allegations that Doha supports “terrorism”.

“It is only once the necessary measures are undertaken by Qatar, that goes towards truly accepting to be a partner in the fight against terrorism, that this crisis will be resolved,” he said.

Egypt’s top diplomat said Qatar was “harbouring elements associated to terrorist ideologies, to radical ideologies, that they have utilised their media outlets to promote and to justify and to glorify terrorist activity”.

Shoukry was highlighting what Egypt’s President Abdel Fattah al-Sisi said on Monday – that his government would keep up the blockade of Qatar, in defiance of international efforts to end the crisis.

“Egypt will stand by its decision and will not backtrack on this matter,” Sisi said at a youth conference in Alexandria. “Our persistence on its own, our stance, and this block, is pressure in itself.”

Qatari Emir Sheikh Tamim bin Hamad Al Thani said on Friday that Doha was ready for dialogue to resolve the diplomatic row with the Saudi-led group, but stressed that any solution to the crisis must respect his country’s sovereignty.

Saudi Arabia, the UAE, Bahrain and Egypt severed relations with Qatar last month, accusing it of supporting “terrorism”. Qatar has denied the allegation.

The four Arab states have demanded that Qatar stop supporting the Muslim Brotherhood movement, end ties with their Shiite rival Iran, and close broadcaster Al Jazeera which they accuse of inciting unrest in their countries.

But they face mounting international pressure to compromise in their weeks-old boycott against Qatar, particularly from the United States.

Mogherini, who at the weekend met Kuwait’s emir Sheikh Sabah al-Ahmad Al Sabah, a key figure involved in trying to mediate the crisis, in turn reiterated calls for talks to resolve the crisis

“We in Europe see this as a need not just for one country but for all countries,” she said on Tuesday, adding that the EU shared with Egypt a “clear commitment to fight terrorism”.

But she added that the EU believed the Kuwaiti-mediated talks “can and should start as a matter of urgency”, if only to head off fresh tensions which undermine the fight against terrorism.

“The EU will continue to have good relations with all the countries involved,” Mogherini added.