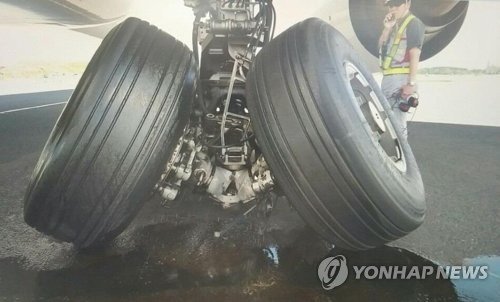 Korean Air Lines Co. said Friday that one of its jets suffered a landing gear breakdown and was forced to stop on the taxiway at Japan’s Narita International Airport.

The incident happened around 12:35 p.m. when a B777-300 was moving on a taxiway to pull into a gate after making a normal landing at the airport near Tokyo, the carrier said.

Korean Air said 319 passengers and 16 crew members were on board the Tokyo-bound plane from South Korea’s Incheon, but none of them were injured because of the mishap.

The carrier said the passengers waited for about 90 minutes before they got off the plane through airstairs instead of at the gate.