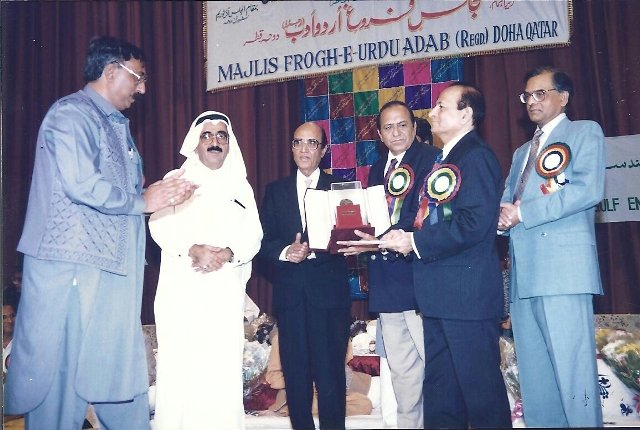 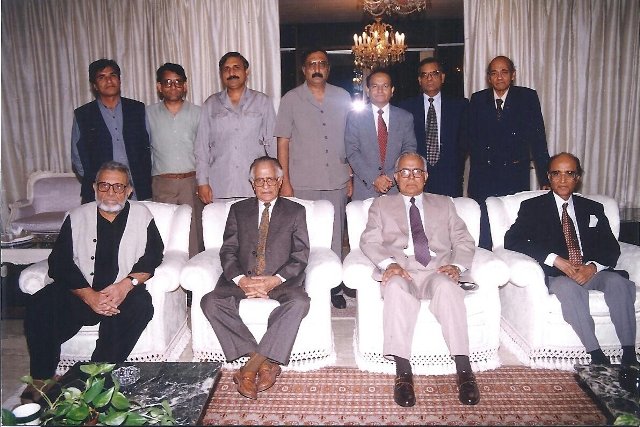 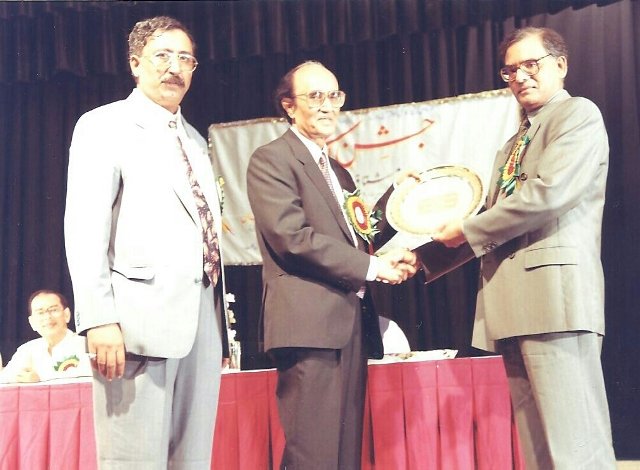 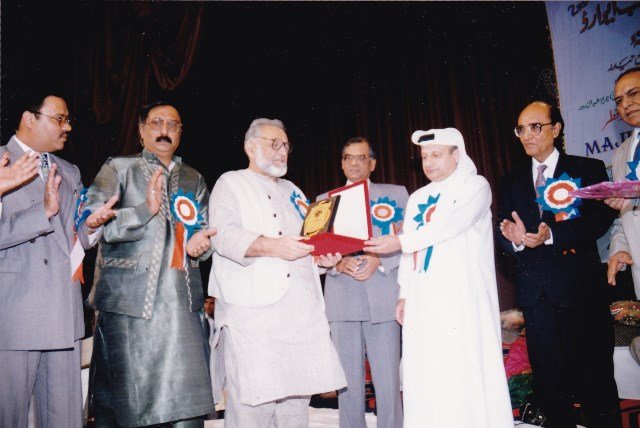 ” Majlis-e-Frogh-e-Urdu Adab and other local Urdu literary figures have expressed profound grief over the death of renowned humourist / satirist writer – Mushtaq Ahmed Khan Yousufi, who was the Chairman of Jury which decides the name of Majlis’ Aalmi Frogh-e-Urdu Adab Award winner from Pakistan, from 1996 to 2012.

Yousufi contracted pneumonia a few days ago, after which he was admitted to a hospital in Karachi. He was placed on a ventilator after his condition worsened. According to his family, he did not suffer from any serious disease but he would often fall ill because of his old age. He breathed his last on Wednesday last week. He is survived by his two sons and two daughters. His wife had expired more than 10 years ago.

Yousufi was born in a learned family of Jaipur, Rajasthan, on 4th September, 1923. His father, Abdul Karim Khan Yousufi was Chairman of the Jaipur Municipality and later Speaker of the  Jaipur Legislative Assembly. Yousufi had topped and obtained first position through out from Intermediate, Bachelor’s degree from Agra University and in Master’s Degree in Philosophy  in first position. He was holding degree on Law in first division from Aligarh Muslim University.

He joined Indian Civil Services and was serving as Deputy Commissioner, Tonk at the time of 1947 partition, his family moved to Pakistan and settled in Karachi.

He joined Muslim Commercial Bank in 1950 and reached to the position of Deputy General Manager. Later, he served in Allied Bank and served as Managing Director in 1965. He served as President of United Bank in 1974 and Chairman of the Pakistan’s Banking Council in 1977.

He also served in Bank of Credit & Commerce International, London and its subsidiaries/ affiliates from 1979 to 1990. He was awarded Quaid-e- Azam Memorial Medal on recognition of his services in Banking sector.

Yousufi is recipient of the following awards :

‘Adamjee Best Book’ Award on his books ‘Khakam Ba Dahan’ and ‘Zarguzasht’ in 1969 and 1976 respectively.

Majlis started in 1996 Annual Award ‘Aalmi Frogh-e-Urdu Adab Award’ from Qatar on the suggestion of renowned writer, author Dr. Gopi Chand Narang from India. This award is given to one from India and one from Pakistan to creative fiction writers.  Awards are presented on the recommendations of designated jury members  of their respective countries.

The scope of the Award was later extended to include  research and criticism. The Award comprised of gold medal and a Cash Award of Rs. 100,000, later increased to Rs. 150,000 to each winner.

The Majlis has been holding annually ”Aalmi Frogh-e-Urdu Adab Award” function since 1996 and Urdu Mushairas’ since 1994.

Mushtaq Ahmed Khan Yousufi has participated in Award and Mushaira events on the invitation of The Majlis in 1996 and 1997 where he presented his papers on literary contributions of  Ahmed Nadeem Qasmi and Ashfaq Ahmed, Awardees of Majlis Award for those years.

Many years ago, Ibn-e-Insha, himself an Urdu satirist and humorist, wrote about Yousufi : ” …. if we could give a name to the literary humour of our time, then the only name that comes to our mind is that of Yousufi ”. Another scholar, Dr. Zaheer Fatehpuri, wrote :

‘ We are living in the ”Yousufi era’  of Urdu literary humour….”. The Yousufi era started from 1961 when Yousufi’s first book  Chiragh Taley  was published. So far, 11 editions of this book have appeared. It has a foreword titled ” Pahla Pathar” written by the author himself plus 12 satirical and homourous articles. In 2008, he was living in Karachi and often appeared in TV programmes as well as seminars. His fifth book Shaam-e-Shair-e-Yaaran was launched at the Arts Council of Pakistan in Karachi in 2014 at a ceremony presided over by a reputed writer and poet, Zehra Nigah who said at the event – ”Neither Yousufi saheb nor any of his books will ever get old. … Yousufi had always been careful about his diction”. She further said that it’s a rarity when the subtle element of surprise was added to humour, something that Yousufi was very good  at. Another distinguished writer and poet, Iftikhar Arif said he had never seen anyone so meticulous about the usage and application of words as Yousufi. ” He is an extremely well-read man. He is not just a great

homourist ; he is a great prose writer.” Artist Zia Mohyeuddin said on the occasion, while we enjoyed Yousufi’s writings immensely,

it is his learnedness that is no less astounding. There would be hardly any writer in the world whom he hadn’t read or not known about. He articulated that humour stemmed from human weaknesses; however, Yousufi’s characters made the reader laugh at them as well as become fond of them. A major English daily newspaper in Karachi called him ” a wordsmith par excellence”.

After his death, Iftikhar Arif said about Yousufi — He was the greatest [ Urdu] prose writer after Ghalib. In the presence of

Shafiq ur Rehman , Petras Bukhari, Col. Mohammad Khan , Ibn-e-Insha, he was the tallest. He was unique and his contemporaries

wholeheartedly acknowledged his greatness. People remember his paragraphs [ not just sentences or words ] like the way they

memorise good couplets. Journalist and poet, Mahmood Shaam was of the view that although the ‘Yousufi era ‘ of humour has come to an end, his writings will live on. He was the kind of humourist and satirist who is known and recognized in all those regions of the world

Prof. Dr. Gopi Chand Narang, Chairman, Indian Jury of Majlis’ Aalmi Award since 1996 said ‘Yousufi saheb was an extremely sophisticated person, so was his wit and humour very urbane and erudite fine use of inversive poetry.  His death has created a void as there is no writer who can write humour in literature the way he did.

Mohammad Atiq, Majlis Chairman, said : ” Yousufi saheb’s death is not only a big loss to his family and Pakistan, but also to Urdu literature and our Majlis. He was widely admired in the literary circles for his unique way of writing and subtle satire. He was the most luminous, par excellence cultural icon.”