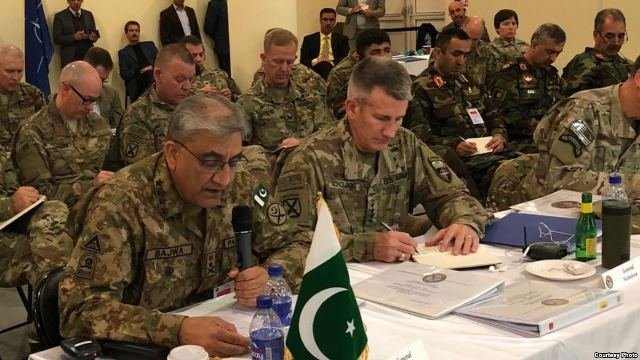 Military Chiefs from Afghanistan’s neighbouring countries, along with US and NATO commanders, met Tuesday in Kabul to discuss cooperation to fight terrorism and narcotics trading.

Pakistan’s Chief of Army Staff Gen Qamar Javed Bajwa made it clear to the stakeholders that the path to regional peace and stability only passes through Afghanistan.

The army chief restated Pakistan’s position while speaking at the Chiefs of Defence (CHOD) conference held at Kabul.

According to a statement issued here by Inter-Services Public Relations (ISPR), the COAS said that regions were developed as a whole, not as individual countries.

Gen Bajwa said Pakistan had eliminated all terrorist sanctuaries from its soil; however, residual signatures of terrorists, who take advantage of the presence of 2.7 million Afghan refugees and absence of effective border security coordination, were also being traced and targeted through ongoing operation Radd-ul Fasaad.

He assured the participants that Pakistani territory would not be allowed to be used against any other country and Pakistan expected the same in reciprocity.

He said that collaborative approach and persistence was the answer to all challenges, for which Pakistan was ready to play its part.

The conference agreed to continue cooperation for peace and stability in the region.

Tuesday’s meeting came amid escalating terrorist attacks in Afghanistan, some claimed by loyalists of Islamic State. It also comes as Afghan poppy production has hit record levels. US officials estimate income from the illegal narcotics made from poppies funds 65 percent of Taliban-led insurgent activities.

Afghan Defence Ministry spokesman Waziri said his government hopes a joint regional security strategy through conferences like the one Kabul hosted Tuesday would also help counter IS terrorists and address complaints by Iran and Russia that terrorism in Afghanistan threatens their sovereignty and regional security interests.

“Regional countries, including Iran and Russia repeatedly raise alarms that Daesh could spill over their borders and discussions [in Kabul] are exploring ways to fight terrorism and counter narcotics through a common strategy or platform,” Waziri noted.

Captain Tom Gresback, spokesman for NATO-led forces, said in a statement the event “afforded leaders the opportunity to meet in person and identify opportunities to protect and promote common interests, specifically pertaining to securing a lasting peace for Afghanistan and stability for the region.”

In addition, the Presidential Palace said President Ashraf Ghani met with Uzbekistan and Kazakhstan’s army chiefs and said their visit to Afghanistan will open a new era for cooperation in the military sector between the three countries.

It is not clear if Pakistan’s army chief will meet with Afghan authorities separately or not.

Participating countries – especially Uzbekistan and Kazakhstan – recently voiced their concern over the growing number of insurgents in the north of Afghanistan. But NATO said it has targeted Taliban and other insurgents the region – conducting a barrage of air strikes against them in the past two weeks.

Earlier this month, Pakistan and Afghanistan had “good discussions” during Afghanistan-Pakistan Action Plan for Peace and Solidarity (APAPPS) talks.

The APAPPS is a joint action plan for cooperation in key areas of counter-terrorism and reduction of violence, peace and reconciliation, refugees’ repatriation and joint economic development.

Pakistan had offered a joint investigation into the Kabul’s attacks that Kabul had blamed on the Haqqani Network.