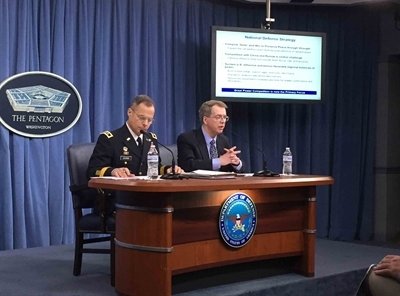 US Department of Defence on Monday 12th February 2018 released details of the president’s fiscal year 2019 defense budget. It calls for $686.1 billion in spending and will reverse years of military erosion, defense officials announced in a press conference.

The budget also calls for a 2.6 percent raise for service members. There is no raise in the budget for civilian employees.

‘The budget is a strategy-driven document that stresses the nation’s primary goals: to defend the homeland, make the military more lethal, and to strengthen old alliances and build new ones’,  David Norquist, US Defense Department Comptroller and Chief Financial Officer said.

“We recognize that, if unaddressed, the eroding U.S. military advantage versus China and Russia could undermine our ability to deter aggression and coercion in key strategic regions,” the comptroller said.

Overall, the budget calls for an increase of 25,900 military personnel by the end of fiscal year 2019. End strength for the department would be set at 1,338,000 active-duty personnel and 817,700 reserve component personnel.

Procurement gets the biggest increase with a $24 billion plus-up to $131.1 billion and with research and development funds increasing by $18 billion to $90.6 billion. The research and development funds will examine new technologies including hypersonic technology, cyber-integrated defense, making space assets more resilient, directed energy weapons and artificial intelligence.

Military personnel funds will receive $12.2 billion more and are pegged at $148.2 billion.

The budget follows strategy on the ground as well. Some of the key enhancements with regard to Asia involve “continued investment in air and space superiority; procurement of additional weapons systems, including the Virginia payload module for Navy submarines; procurement of additional P-8As, … and work to increase naval presence appropriately as this strategy is implemented in the Pacific, to include infrastructure investments,” said Army Lt. Gen. Anthony Ierardi, the director of force structure, resources and assessment at the Joint Staff.

“In Europe, we continue robust increases in our investments to enhance Army pre-positioning stocks and responsiveness, including the enhancement of a second armored brigade combat team’s worth of equipment in an Army pre-positioned set; replenishment of wartime stocks, including preferred and advanced munitions and increased lethality of each; and expansion and enhancement of air bases to support our operations, as appropriate,” the general said.

Among the new equipment coming into the military are 77 new F-35 Lightning II’s to the Air Force and Navy, 60 new AH-64 Apache helicopters, 15 new KC-46 Pegasus tanker aircraft, 10 new P-8 Poseidon aircraft, 10 new ships added to the fleet and a myriad of space and cyber capabilities.

The budget begins the process of modernizing the nuclear triad with $2.3 billion dedicated to the Air Force’s B-21 bomber, $3.7 billion to the Columbia-class submarine and $300 million to the ground-based strategic deterrent.

Today on Wednesday, Afghan News Agency ‘Khaama News’ reported referring US military officials as saying that around $5.2 billion have been requested for the Afghan national defense and security forces in the defense budget for the US army for the fiscal year 2019.

This comes as efforts are underway by the Afghan government and its international allies to boost the capabilities of the Afghan national defense and security forces.

According to Gen. Bunch, the first four UH-60 Black Hawks were delivered to the Afghan Air Force, and the first six pilots have already graduated from training.

“We expect to have eight full crews at the beginning of the fighting season in 2018.  And those Black Hawk helicopters are just the first of up to 159 that we’re going to provide them,” he said.