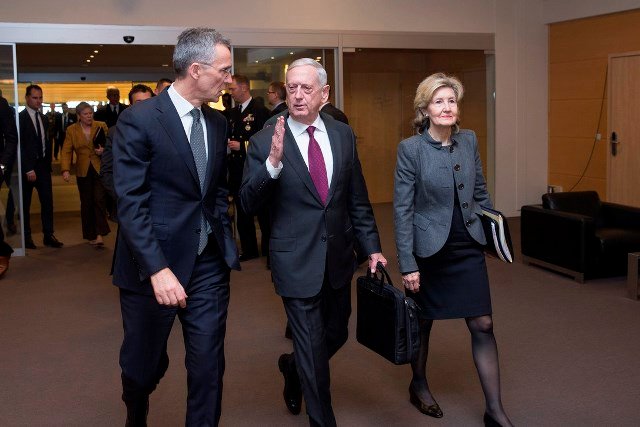 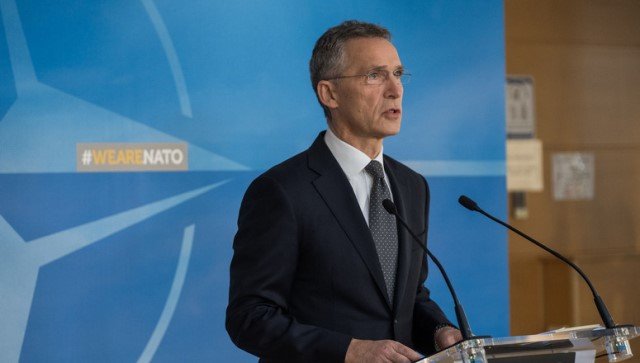 Today and tomorrow, Defence Ministers will meet here in Brussels to prepare for our Summit in July.

We will begin with a meeting of the Nuclear Planning Group. Part of our regular consultations to keep NATO nuclear forces safe, secure and effective.We will also take decisions to modernise NATO’s Command Structure.

I expect we will agree to establish two new Commands. One for the Atlantic. And a support command for military mobility within Europe. As well as a new Cyber Operations Centre.

Later today we will address defence spending and burden-sharing among Allies.

To keep our nations safe, we need more defence spending, investment in key capabilities, and forces for NATO missions and operations. In other words, more cash, capabilities and contributions. Last year, Allies decided to report annually on how they intend to deliver all three. And today, we will review how far we have come. The reports confirm that we have made substantial progress. But we still have a lot of work to do.

Tonight we will meet with High Representative / Vice President Federica Mogherini. As well as our colleagues from Sweden and Finland. Together we will discuss EU’s efforts on defence and NATO-EU cooperation. Done in the right way, these efforts can make a contribution to fairer burden-sharing between Europe and North America.

Tomorrow we will focus on our progress in implementing our deterrence and defence posture. We will also discuss NATO’s role in projecting stability and the fight against terrorism.

NATO contributes to the Global Coalition to Defeat ISIS with AWACS surveillance flights and training for Iraqi forces. And the Coalition has made major progress.

Liberating nearly all of the territory once held by ISIS in Iraq and Syria. But ISIS will remain a threat even when they no longer hold any territory. So training for the Iraqi forces is key.

In response to a request from the Iraqi government and the Global Coalition, I expect we will agree to begin planning for a NATO training mission in Iraq. This will put our presence on a firmer footing. With established procedures for generating forces and funding. This will help make Iraq safer. And us more secure.

And with that, I’m ready to take your questions.

A: We welcome the plans to further increase US presence in Europe. Both with more money for troops, for exercises, for equipment, for pre-positioned supplies. This is actually an incentive for Europeans to do even more. That’s exactly what we’ve seen. Because since 2014, we have seen that both the US and Europe have stepped up. We have seen increased US presence. At the same time as European Allies have stepped up, both by investing more in defence, increasing their defence budgets in real terms but also stepping up, for instance, with more troops to our Enhanced Forward Presence in the Baltic Region and Poland but also to the south-east of the Alliance. So this goes hand-in-hand, the increased US presence, goes hand-in-hand with European Allies doing more for their own defence.

On the foreign fighters, they are a concern. They are responsible for criminal acts, for violence. And they can still be a threat. Therefore I welcome the efforts of the nations within the Global Coalition to Defeat ISIS to decide how to deal with them. It’s not for NATO but for the nations inside the Coalition to make those decisions.

Q (European Pravda Kyiv): My question is about Ukraine. Why Ukraine is still not in official list of aspiration countries?

A: NATO and Ukraine we have a very strong partnership. And NATO provides strong political support, strong practical support to Ukraine. And NATO Allies also provide support on a bilateral basis. And we encourage and we welcome all that. So we’ll continue to strengthen our partnership, we’ll continue to work with Ukraine. And the focus now is on reforms. And I welcome that Ukraine has so clearly stated that their focus now is on reform, and then based on the progress they’re making on reform, then of course the issue of membership will be assessed based on the progress Ukraine is making.

Q (ZDF): Secretary General, what do you say to the critique that NATO is more and more returning to old bloc thinking? And is reviving the weapons race in Europe?

A: NATO is a defensive alliance. What we do is proportionate and measured. And for many, many years after the end of the Cold War, NATO Allies reduced defence spending, reduced their military capabilities. And we tried to establish a partnership with Russia. Then we have seen, especially since 2014 with the illegal annexation of Crimea, with Russia being responsible for destabilising eastern Ukraine, we’ve seen a pattern where Russia is more assertive and where Russia has been responsible for violating international law. We are responding in a defensive, proportionate way. With some more military presence in the eastern part of the Alliance. Germany is part of that, leading one of the battlegroups in Lithuania. But at the same time, we strive for a better relationship with Russia. We don’t want a new Cold War, we don’t want a new arms race. And therefore we have what we call the dual-track approach to Russia: defence and dialogue. We have to be firm, we have to be predictable, but at the same time we will work for a better relationship and for dialogue with Russia.

Q (Rudaw): Secretary General, you know there is fighting in north of Syria and Turkey is a key member in NATO. Will you discuss about that current situation today in your meetings with the Defence Minister of Turkey, maybe with the Defence Minister of USA and other member states? Another question about the training and cooperation with the Iraqi forces – would you focus on Iraqi forces in the south and middle of Iraq or in the Kurdish region also, KRG? Thank you.

A: We will discuss NATO’s role in the fight against terrorism. And NATO is contributing to the fight against terrorism in many different ways. We are present in Afghanistan to fight terrorism, and we are a member of the Global Coalition to Defeat ISIS. We support the Coalition by our AWACS surveillance planes and also with some training in Iraq. And all NATO Allies participate in different ways in the Coalition. But NATO is not present on the ground in northern Syria. Turkey has some legitimate security concerns. No other NATO Ally has suffered more terrorist attacks, but we expect Turkey to respond in proportionate and measured way. There are contacts between the United States and Turkey, addressing the challenges we see in northern Syria, but as I said NATO is not present on the ground. But Turkey has briefed NATO Allies on their Operation Olive Branch, and I expect Turkey to continue to brief NATO Allies on the operation in northern Syria.

When it comes to training in Iraq, well, we have some training activities there now. But we are starting – I expect Defence Ministers to agree to start planning for a training mission, which will provide a better footing for more training. And enable us to do more training if we so decide. Since this is just now planning, it is a bit too early to say what kind of training. But the request from the Iraqi government is about more training to professionalize the Iraqi forces, the Iraqi government forces. And to help them to build military academies, military education institutions, schools. Training their officers, train the trainers. But what we’ll do in Iraq, we’ll do in full coordination with the government in Baghdad.

Q: A question on Germany. How do you see Germany’s role in the NATO? Particularly concerning the point that there are plans of locating troops in Germany in a not-yet-named branch? And also the fact that Germany is doing financial measures to reach the 2% goal?

A: We welcome that Germany has started to invest more in defence. I’ve been a politician for many, many years. And I understand that most politicians want to spend money on education, on health, on infrastructure instead of defence. And most NATO Allies reduced defence spending after the end of the Cold War because then tensions went down. But if we reduce defence spending when tensions are going down, we have to be able to increase defence spending when tensions are going up, and they are going up now. We see the violence, we see the turmoil to the south of the Alliance – Iraq/Syria. We also see a more assertive Russia. The purpose of having a strong NATO, of also Germany participating to critical deterrence and defence within NATO, is not to provoke a conflict but it is to prevent a conflict. And therefore we welcome the increased efforts by Germany to strengthen its armed forces and also that Germany contributes to our Enhanced Forward Presence by leading the battlegroup in Lithuania. And also the presence of German troops, for instance Afghanistan, but also in the Aegean Sea and the Mediterranean where we deal with the challenges we see in that part of the world. So NATO is present in many places, Germany is part of that, and I welcome the German contribution to strengthening NATO’s deterrence and defence.