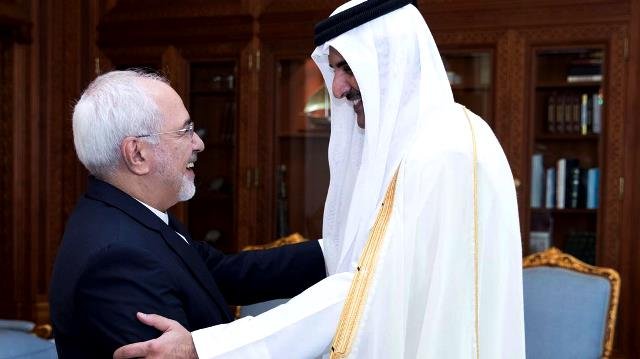 The visit is Zarif’s first to Doha since four Arab countries – Saudi Arabia, the United Arab Emirates, Bahrain, and Egypt – cut diplomatic ties with Qatar on June 5 and imposed a land, air and sea blockade.

“During the meeting, they reviewed relations of cooperation between the two countries in various fields as well as exchanged views on the current situation in the region,” a statement from Qatar News Agency said, referring to Tuesday’s talks.

In January 2016, Qatar had pulled its ambassador from Tehran over attacks on Saudi Arabia’s diplomatic mission there, after the kingdom executed a Shia religious scholar.

Iranian state media published images of Zarif at the Doha meeting and quoted him as saying: “None of the regional crises have a military solution.

All sides should “give priority to regional initiations for restoring collective stability and security”.

Zarif on Monday met Omani officials, including Sultan Qaboos bin Said, who has ruled Oman since 1970 and has served as an interlocutor between the West and Iran.

Kuwait has tried unsuccessfully to mediate the Gulf Cooperation Council (GCC) crisis, as has the US, which has a major military base in Qatar.

On June 22, the Saudi bloc issued a 13-point list of demands, including the shutdown of Al Jazeera, limiting ties with Iran and expelling Turkish troops stationed in the country, as a prerequisite to lift the sanctions.

The quartet accuse Qatar of supporting “extremism” and fostering ties with Iran. Qatar has rejected the allegations as well as the demands, and the quartet now consider the list “null and void”.

Against this backdrop, a new academic survey published this week suggests that the average citizens in the Arab members of the GCC do not see Iran as an existential threat in the same way some of their leaders do.

Face-to-face surveys of over 4,000 GCC citizens conduced in recent months found that with the exception of Bahrain, the spread of violent organisations like al-Qaeda and the Islamic State of Iraq and the Levant (ISIL) group represented their biggest worry, said Justin Gengler, a senior researcher at the Social and Economic Survey Research Institute at Qatar University.

Gengler said the survey, funded by the Qatar National Research Fund before the Gulf crisis began and conducted along with researchers from the University of Michigan, was conducted in every GCC country except the UAE.

Gengler first published his results on Monday in the prestigious Foreign Affairsmagazine. The margin of error was below four percent among the surveys in each country.

Leaders in the Arab Gulf countries, those in Saudi Arabia and the UAE especially, view Iran with suspicion after its recent advances on the battlefields of Iraq and Syria.

They also worry about Iran’s nuclear programme and the 2015 deal that Iran struck with world powers over it.

“They said Qatar was now closer to Iran. By their measures they are pushing Qatar to Iran,” he said in comments in Paris.

“Is that their objective, to push one country, a GCC member state towards Iran? This is not a wise objective.”