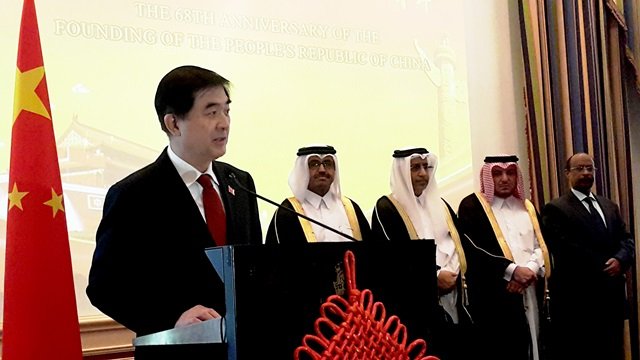 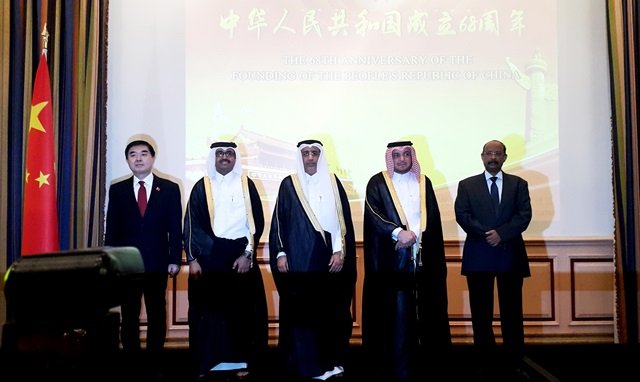 Ambassador Li Chen of China said that Chinese contribution of 30 % towards world’s economic growth makes China a “main engine” of the world economy. Addressing recently at a reception hosted by him on the occasion of 68th anniversary of Founding of the People’s Republic of China, Li Chen said China stands as world’s second largest economy and second largest country of trading and foreign direct investment.

He lauded strong relations in all fields between both the countries and told that during first half of 2017, bilateral trade between China & Qatar exceeded US $ 3. 3 Billion, a  growth of 19.82 %  to the same period of year 2016.

‘ Ever since its founding in 1949, the People’s Republic of China has made remarkable achievements. Especially over the past three decades of reform and opening up, both the Chinese economy and society have experienced rapid growth with a rising comprehensive national strength, and a significant improvement of the people’s living standards. China has now become the second largest economy in the world, the second largest country of trading and foreign direct investment. In 2016, despite the sluggish recovery of the world economy, the Chinese economy achieved a steady GDP growth of 6.7%. Making over 30% of contribution to global economic growth, the highest among all nations. China has thus become a “main engine” of the world economy. China’s development has not only improved the quality of living of the Chinese people which covers 19.2% of world population, and effectively promoted the stability and development of the global economy.

Over 1,300 years ago, ancient Chinese merchant ships set sailing from Guangzhou port in the South of China, crossing the waters in Southeast Asia and finally arrived in the Arabian Peninsula. China and the Gulf Countries were connected by the ancient Maritime Silk Road ever since.

In 2013, Chinese President H.E. Xi Jinping proposed The Silk Road Economic Belt and the 21st-Century Maritime Silk Road (the Belt and Road initiative), once again creating close ties between China and the Gulf States as well as other countries along the routes. Qatar is an important country with unique influence in the Gulf region, and has been a supportive partner in the Belt and Road cooperation. It is one of the first countries that offer actively respond to Belt and Road initiative, thus becoming an important partner in making joint contributions to the initiative.

During H.H. Sheikh Tamim bin Hamad al-Thani Emir of Qatar’s visit to China in 2014, the two heads of state agreed to raise the China-Qatar relations to a strategic partnership, and signed the MoU of jointly building the Belt and Road.

Right now, Staff Major General Saad Bin Jassim Al-Khulaifi, the the Director General of Public Security is paying a visit to China, the tow countries will sign agreements of cooperation in the security field.

January to June this year, total volume of import and export trade between China and Qatar exceeded 3.3 billion dollars with a growth of 19.82%. Qatar has become the second largest exporter of LNG to China, while China is the fourth largest trading partner and the second largest exporter to Qatar. Chinese companies has participated in strategic and major projects in Qatar like the Hamad Port and the main stadium of the 2022 World Cup. Additionally, the Chinese Navy fleet visited Qatar, China-Qatar 2016 Year of Culture had made a successful conclusion, which has greatly enhanced the understanding and friendship between the people of China and Qatar.

The next year will mark the 30th anniversary of diplomatic relations between China and Qatar, the China-Qatar relationship is entering a new phase of rapid development. China is willing to continue working together with the State of Qatar to enhance political trust, deepen economic cooperation and increase cultural exchanges.

At the present time, the Chinese people are striving to fulfill the Chinese dream of the great rejuvenation of the Chinese nation, the Qatari people are also devoted to realize the Qatar National Vision 2030. We are convinced that the China-Qatar relationship if full of opportunities and broad prospects, and will continue to achieve even more development and delivering greater benefits to the people of the two countries.

Thank you all again for your presence tonight. Let us wish China and Qatar a progressive and prosperous future, wish the China-Qatar relationship lasts forever, and wish everyone here tonight all the best !