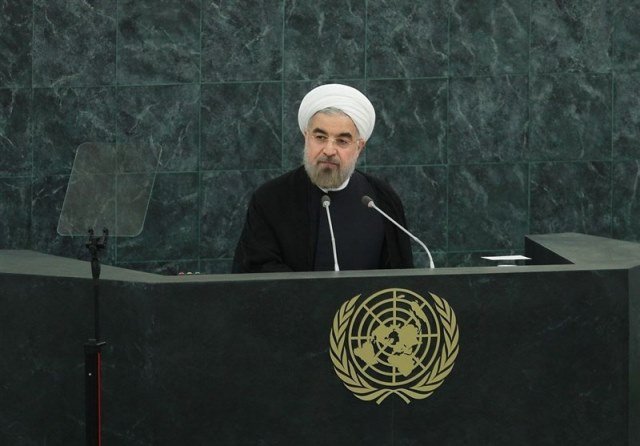 ‘I declare before you that the Islamic Republic of Iran will not be the first country to violate the agreement; but it will respond decisively and resolutely to its violation by any party,’ he said while addressing the United Nations General Assembly.

‘It will be a great pity if this agreement were to be destroyed by ‘rogue” newcomers to the world of politics: the world will have lost a great opportunity. But such unfortunate behavior will never impede Iran’s course of progress and advancement.’

The President said that ‘By violating its international commitments, the new US administration only destroys its own credibility and undermines international confidence in negotiating with it, or accepting its word or promise.’

He has held several meetings with his counterparts on the sidelines of the UN General Assembly and made several interviews with the international media.

President Rouhani is attending the UN General Assembly meeting for the fifth time. He said that the call of moderation is from a nation that has been committed to it. We are not preaching moderation, but practicing it. The JCPOA is a case in point.

US President Donald Trump said in his first address to UN General Assembly that he had made his decision on whether his country will remain in the nuclear pact, but declined to reveal it.

“I have decided,” Trump told reporters when asked if he had made up his mind.

The prospect of Washington reneging on the agreement has worried some US partners that helped negotiate it.

French President Emmanuel Macron said it would be a mistake to pull out of the pact.

“According to me, we have to keep the 2015 agreement because it was a good one,” Macron told reporters at the UN.

Russia is concerned by Trump questioning the Iran nuclear deal, Foreign Minister Sergei Lavrov told Russian reporters at the UN in comments published by his ministry on Wednesday.

“It’s extremely worrying,” Lavrov said. “We will defend this document, this consensus, which was met with relief by the entire international community and genuinely strengthened both regional and international security.”