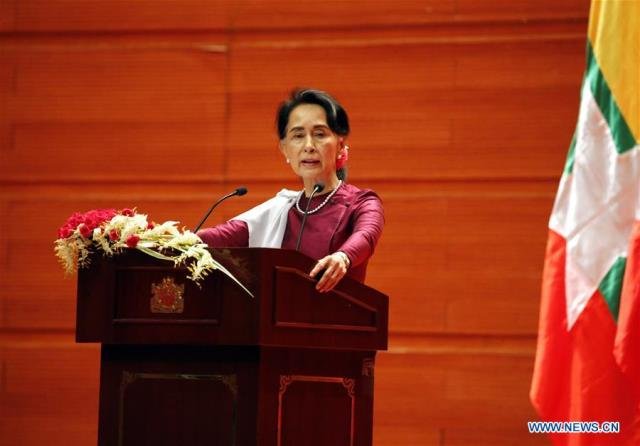 Myanmar State Counselor Aung San Suu Kyi on Tuesday called on the international community to cooperate for constructively tackling the issue of the northern Rakhine state.

Aung San Suu Kyi voiced government’s pledge to implement the recommendations by the Advisory Commission, led by former UN Secretary-General Kofi Annan, saying that those recommendations will help bring speedy improvement to the situation of the state within the shortest time frame.

Briefing government’s efforts to restore the situation in Rakhine state at the convention center, attended by 700 participants, including 120 foreign diplomats, Suu Kyi stressed that there had been no armed clashes nor clearance operation since Sept. 5, but she was concerned about reports that numbers of Muslims are fleeing across border to Bangladesh.

She said she wants to determine the cause of the recent exodus of Muslims from Rakhine state by talking to those who have fled as well as those who stayed, while inviting the diplomatic community to join the investigation.

She warned that action would be taken against anyone regardless of race, religion and political stance who violated human rights in Myanmar.

Aung San Suu Kyi voiced the Myanmar government’s readiness to start verification process of refugees in Bangladesh at any time as part of the refugee repatriation process in line with the 1993 Agreement between Bangladesh and Myanmar, saying that verified refugees, who were from Myanmar, will be accepted and provided with full assurance of security and other humanitarian aid and encouraging the Muslims to join the process.

She highlighted the government’s social economic development in Rakhine, disclosing that the Rakhine state’s socio-economic development plan 2017-2021 has been drafted to boost regional development in various sectors, including infrastructure and electrification as well as creation of new job opportunities for local people through private-public partnership.

She stressed that all people in Rakhine state have access to education and healthcare services without discrimination.

She also said the government is trying to promote inter-communal religious harmony by engaging interfaced groups.

With regard to relations with Bangladesh, Aung San Suu Kyi said the government is trying to enhance the existing relations, expecting the Bangladeshi home minister to visit Myanmar to jointly handle the security affairs of the border.

Terrorists launched fresh attacks on police outposts in Rakhine on Aug. 25, displacing residents from a number of areas in Maungtaw district.