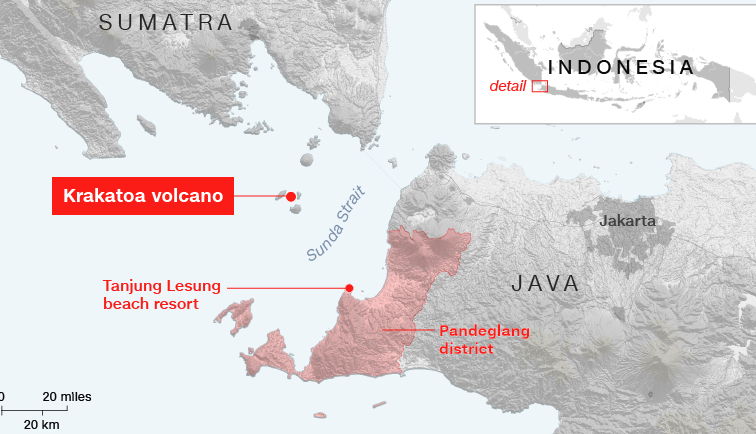 Death toll from the tsunami which hit Indonesia’s Sunda Strait Saturday night has risen to 222, according to the country’s national disaster agency.

Sutopo Purwo Nugroho, spokesman of the National Disaster Management Agency, said in a statement that the number of injured increased to 843 in the tsunami — likely triggered by a volcanic eruption.

Nugroho said that 28 people remain missing, adding that a total of 556 houses and many buildings were damaged after the tsunami — which mostly affected the Pandenglang, South Lampung and Serang areas. In an earlier statement Nugroho said that the death toll may still increase as not all affected areas were recorded.

“The affected areas are settlements and tourist areas along the coast such as Tanjung Lesung Beach, Sumur, Teluk Lada, Penimbang and Carita. The time of many tourists visit the beach along Pandeglang,” the statement read.

According to the country’s Meteorology, Climatology, and Geophysical Agency, the tsunami could have been triggered by undersea landslides after the eruption of Anak Krakatau. The agency said the tsunami struck around 24 minutes after the volcanic eruption.

Emergency teams are dispatched to the disaster-hit area while heavy equipment is also deployed to assist evacuation and emergency repairs, Nugroho said.

Indonesia lies within the Pacific Ocean’s “Ring of Fire” where tectonic plates collide and cause frequent seismic and volcanic activity.

Last September, a 7.4-magnitude earthquake had struck the country’s Sulawesi Island, which triggered a tsunami in the cities of Donggala and Palu that towered up to 10 feet (3 meters) high, killing over 2,000 people.

On Dec. 26, 2004, a magnitude 9.1 earthquake struck the eastern coast of Sumatra, triggering a tsunami that killed around 230,000 people as it tore along the coasts of Sri Lanka, India, Malaysia, Indonesia, and Thailand.

Doha, 12 May 2021 Taleban leadership in a statement to media ...
END_OF_DOCUMENT_TOKEN_TO_BE_REPLACED