End of America’s Honeymoon with MBS? 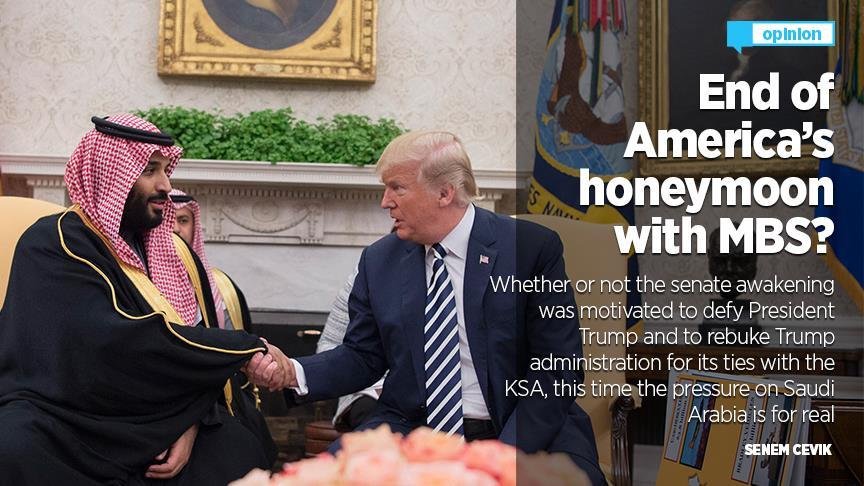 For the Kingdom of Saudi Arabia (KSA), public diplomacy has always been at the forefront of its foreign affairs. The Wahhabi and Salafi clergy in the KSA have been spreading their interpretation of Islam for decades through a campaign throughout predominantly Muslim nations. Saudi soft power is connected to the Saudi interpretation of Islam and efforts to export the Wahhabi ideology across the globe. As a result, the KSA’s religious diplomacy pits itself against all other interpretations of Islam and other efforts to export religion by other countries. Saudi religious diplomacy has therefore allowed the KSA to exert influence in Muslim countries, predominantly in the Balkans and the broader Middle East. Saudi Arabia remains the largest economy in the Muslim world and is a gravitational center for regional influence.

The relationship between the U.S. and the KSA is a long established economic relationship built on the U.S.’ dependency on oil and Saudi arms purchases from the U.S. Unlike previous U.S. presidents, Barack Obama had a relatively hands-off approach in dealing with Saudis due to the undemocratic nature of the KSA’s internal affairs and its demand to curb Iran’s ambitions. In contrast, President Donald Trump chose Saudi Arabia as his first overseas presidential visit, signaling a major reversal from Obama-era policies towards the KSA and Iran. The Trump administration’s close ties with the KSA and its unwavering support to the Crown Prince Mohammed bin Salman have been guiding the U.S. policy in the Middle East. Both the Obama and Trump administrations were silent to and therefore complicit in the KSA’s war crimes in Yemen as the weapons sales to Saudis skyrocketed during the Obama administration, and the Trump administration went further by lifting the arms sales limitations for the war in Yemen.

Throughout the many decades of the Saudi-U.S. relationship, the KSA poured in billions of dollars into public relations campaigns and lobbying. One of the most troubling times for the Saudi-U.S. relationship came after the 9/11 terrorist attacks as fifteen Saudis were involved in the incident. Soon after Saudi links were unveiled, the KSA launched a campaign to improve its image. [1] The KSA hired a U.S.-based public relations firm, Burson-Marsteller, which was the very firm behind the Blackwater and Ceausescu image campaigns, amongst other notorious ones. Burson-Marsteller ran print ads in American newspapers and scheduled TV appearances for Prince Bandar bin Sultan bin Abdulaziz. The KSA then hired Qorvis, another Washington-based PR company, to do polling and lobbying. The first major Saudi image campaign came in 2002 with the Saudi Peace Initiative, which was later named the Arab Peace Initiative. This campaign aimed to offer a peace plan for the Middle East conflict between Israel and Arab nations. Prior to its official announcement, the Saudi Peace Initiative received significant global media coverage. The Saudi charm offensive in an effort to reframe the discussion on Saudi support for terrorism was assisted by radio and TV spots.[2] The Saudi messaging, for the most part, did not sit well with the American audience because of the discrepancy between the values the KSA represented and those embraced by Americans.

To be sure, Saudi Arabia still suffers from an unfavorable image due to its reputation for its treatment of women, its aggressive posture toward Iran and its repressive internal policies. Despite numerous public relations campaigns, Saudi Arabia has not been able to gain a favorable public opinion in the U.S. The ascendance of Saudi Crown Prince Mohammed bin Salman to the political scene, however, changed the course of Saudi publicity. Crown Prince Mohammed bin Salman, or MBS — his popular moniker — is the de facto ruler of the KSA and has been on a charm offensive tour in the West, trying to rebrand Saudi Arabia as a leading moderate voice in the Islamic world. Saudi Arabia, with the leadership of the crown prince, is trying to change the perception of the country and to create an image of a young leader in tune with global trends. Saudi propaganda frames Mohammed bin Salman as someone who is driving social change. He launched a campaign to modernize Saudi Arabia by lifting a 35-year cinema ban, granting women the right to drive, and curbing the power of the unpopular religious police. These changes were accompanied with Saudi Arabia opening itself to tourism and visitors, and embracing arts as its public diplomacy strategy. Mohammed bin Salman established the Misk Art Institute in 2017 ‘to encourage grassroots artistic production in Saudi Arabia, nurture the appreciation of Saudi and Arab art, and enable international cultural diplomacy and exchange.’[3] The Misk Art Institute launched its international programs at Dubai, the Kennedy Center in Washington D.C., Paris’s Institut du Monde Arabe, and at both the Los Angeles and New York Museum of Modern Art. The Misk Art Institute supported two Saudi artists to curate Saudi Arabia’s first ever participation in the Venice Biennale of Architecture in the summer of 2018.

Aside from arts and culture, Mohammed bin Salman launched plans to curb the KSA’s oil dependency by building a futuristic city. At the same time, he promoted religious tolerance and dialogue through the World Muslim League. New York Times columnist Thomas Friedman dubbed the Saudi charm offensive the “Saudi Spring”.

During his two-and-a-half-week trip to the U.S., American journalists and policy experts hailed the crown prince and his efforts to modernize Saudi Arabia. Mohammed bin Salman wooed the executives of Silicon Valley, the Wall Street, and Hollywood. He met with celebrities, such as Oprah, Dwayne “The Rock” Johnson, the Clintons, and the Obamas, and the CBS even aired an exclusive interview with the crown prince.[4] Promotional booklets that praised Saudi modernization efforts were printed and distributed in rural America. The U.S. media was enamored of the Saudi charm offensive for about a year until he began to show signs that he was, in reality, no reformer. First, he locked up dozens of princes and public figures in a luxury hotel last year, charging them with corruption. He detained Lebanon’s Prime Minister Saad Hariri and forced him to resign, and continued to detain dissidents and lock up female activists. Mohammed bin Salman got in a diplomatic row with Canadian Prime Minister Justin Trudeau over the Saudi human rights record and ended up damaging the Saudi diplomatic ties with Canada. Even then, the U.S. stayed idle and Saudi Arabia continued to receive unwavering support from most U.S. policymakers citing the KSA’s support for the U.S.

Notwithstanding all the previous U.S. backing, the murder of journalist Jamal Khashoggi violated all diplomatic norms and exposed the Saudi reality. A CIA investigation concluded that Mohammed bin Salman ordered the murder of Khashoggi. After all, Mohammed bin Salman’s reforms were nothing more than window dressing. For the first time, the U.S. Senate voted to end U.S. support for the war in Yemen and public opinion of Saudi Arabia remains unfavorable. Whether or not the senate awakening was motivated to defy President Trump and to rebuke Trump administration for its ties with the KSA, this time the pressure on Saudi Arabia is for real.

[Senem Cevik is a lecturer in International Studies at the University of California, Irvine. She is the co-editor of Turkey’s Public Diplomacy (Palgrave Macmillan, 2015)]

* Opinions expressed in this article are the author’s own and do not necessarily reflect the editorial policy of Anadolu Agency.

9,592 Troops Of 36 Countries Serving In Afghanistan

Kabul, 18 April 2021 (Anadolu News) In line with US President ...
END_OF_DOCUMENT_TOKEN_TO_BE_REPLACED