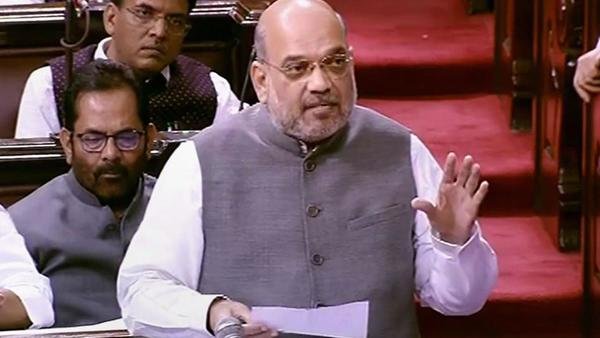 G.S.R .551(E).— the following Order made by the President is published for general information:-
THE CONSTITUTION (APPLICATION TO JAMMU & KASHMIR) Order, 2019
C.O. 272

In exercise of the powers conferred by clause (1) of article 370 of the Constitution, the President, with the concurrence of the Government of State of Jammu and Kashmir, is pleased to make the following Order:—

2. All the provisions of the Constitution, as amended from time to time, shall apply in relation to the State of Jammu and Kashmir and the
exceptions and modifications subject to which they shall so apply shall be as follows:—

To article 367, there shall be added the following clause, namely:—
“(4) For the purposes of this Constitution as it applies in relation to the State of Jammu and Kashmir—

(d) in proviso to clause (3) of article 370 of this Constitution, the expression “Constituent Assembly of the State referred to in clause

(2)” shall read “Legislative Assembly of the State”.”

Home Minister Amit Shah on Monday moved a resolution in Rajya Sabha to abrogate Article 370 of the Constitution that extends special status to Jammu and Kashmir. The government, which listed four bills and legislative proposals before the Rajya Sabha, intends to get the resolution passed by the end of day.

As Shah read out the details of the proposal, opposition leaders tried to disrupt the proceedings but did not get far. Amit Shah, who also leads the Bharatiya Janata Party, continued to read out his other proposals.

Parliamentary affairs minister Pralhad Joshi sought to reprimand the opposition. “Amit Shah is rectifying the historical blunder of Jawaharlal Nehru,” Joshi told the opposition benches about the resolution that had been on the agenda of the ruling BJP for years.
Regional parties in Jammu and Kashmir have called attempts to abrogate Article 370 an aggression against the people.
Home Minister Amit Shah said he would also speak about the situation in Kashmir which has been put under a security lockdown by the administration. Movement of several political leaders such as former chief ministers Omar Abdullah and Mehbooba Mufti have been restricted by the administration which has also severely curtailed movement of public.

The communication network in the Valley – mobile, fixed line and internet – has been shut down and key officials given satellite phones to stay in touch.

“As per the order, there shall be no movement of public and all educational institutions shall also remain closed. There will be a complete bar on holding any kind of public meetings or rallies during the period of operation of this order,” the administration said late on Sunday night.

Amit Shah’s statement in Parliament, first in the Rajya Sabha and later in the Lok Sabha, came after meetings of the Union Cabinet and the government’s top-decision making body on security matters, the Cabinet Committee on Security headed by Prime Minister Narendra Modi.
The General Secretariat of the Organisation of Islamic Cooperation (OIC) on Sunday expressed deep concern over the deteriorating situation in India-held Kashmir, including the reports of deployment of additional paramilitary forces there.

“The General Secretariat is saddened to learn about the civilian casualties resulting from ceasefire violations carried out by Indian forces across the Line of Control [LoC] and expresses solidarity with the people of Indian-occupied Jammu and Kashmir,” the OIC said in a statement.

Indian forces had landed in Sri Nagar on 27th October 1947, just after the independence from British colonial rule and creation of Islamic Republic of Pakistan on 14th August 2019. It was decided between British, Indian Hindu majority leadership and Muslim leadership that majority Muslim populated areas will be part of Pakistan. However, Indian forces landed on 27th October 1947 in Sri Nagar, Capital city of Muslims dominant Kashmir region. Then Indian government immediately appealed in UN Security Council for ceasefire. India agreed with the World body to carry out plebiscite in Kashmir and let the Kashmiri people decide whether they want to join India or Pakistan. Since then, India has been using delaying tactics carrying out plebiscite and refusing to implement on its promises with the world body.

Indian held Kashmir is seen as military zone as 700,000 Indian forces are deployed in the valley. Since 1980s, according to various int’l human rights bodies have claimed over 100,000 brutal deaths, tens of thousands disabled and tens of thousands of Kashmiri freedom fighters are behind bars without trials. Indian forces are using all lethal illegal weapons including crystal bombs on the civilians.

Doha, 24 Sept. 2022 (QE) QatarEnergy announced that it has selected ...
END_OF_DOCUMENT_TOKEN_TO_BE_REPLACED