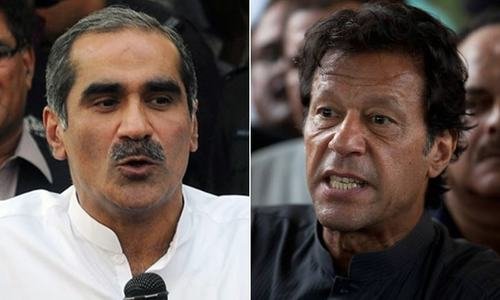 PTI Chairman Imran Khan, through his counsel Babar Awan, on Monday submitted an appeal before the Supreme Court to challenge the Lahore High Court’s (LHC) decision where it had restrained the Election Commission of Pakistan (ECP) from issuing the victory notification of the PTI chief from NA-131, Lahore.

The LHC issued the directives on Saturday after hearing the petition filed by PML-N leader Khawaja Saad Rafique and ordered the returning officer to hold a recount of all ballot papers.

Justice Mamoonur Rashid directed the ECP to withhold the notification announcing Khan’s win from the constituency until the recount is completed. According to the order issued by the judge, recounting must take place within three days of receiving the court’s order.

Rafique, the former railways minister, had lost the poll to the PTI chief in NA-131 constituency (Lahore-VII) by a margin of only 680 votes, receiving 83,633 votes against Khan’s 84,313, according to the Form-47 available on the ECP website.

The 2,835 rejected votes from the constituency were then recounted on Rafique’s request, which resulted in slight changes to the final count but Imran Khan still remained the winner by a few hundred votes.

After losing the recount, Rafique had applied for yet another recount, this time seeking the fresh counting of all votes cast in the constituency. However, this request was rejected by the Returning Officer.

Rafique subsequently approached the high court, requesting it to order a full recount of the constituency.

Rafique’s lawyer, Azam Nazir Tarar, argued before the court that the RO, when first approached for a recount, had said that the rejected votes would be examined first.

“After the rejected votes were examined [and] when we asked for the bags of ballot papers to be opened for a full recount, our request was rejected,” he said.

To support his arguments, Advocate Tarar said that a recount on a provincial seat from the same constituency had led to a rise in the number of votes for Rafique.

“My client claims that 2,800 votes have not been made part of the final count,” he told the court.

In a note of appreciation for the prime minister-in-waiting, the lawyer said: “I was deeply affected by Imran Khan’s victory speech in which he showed willingness to open up any constituency for recounting for which there were objections.”

However, “if Imran Khan had backed his statement with concrete action, then there would have been no need to approach the high court,” he said.

On the other hand, Babar Awan, who was representing Khan, claimed that the RO had ordered the recounting of votes without hearing his side of the argument.

“He should have issued the order after having heard from all parties involved. We only received a notice asking us to appear for the recounting,” he claimed.

Justice Rashid after hearing arguments from both Rafique as well as Khan’s lawyers announced the decision in the PML-N leader’s favour.

The recounting will begin after a notification is sent to all the candidates, the written court order states.

The court order also states that the Form 49 issued by the RO shall stand suspended while recounting takes place, after which a new Form 49 will be issued.