I Wish to Hold My Peace for Now: Nawaz Sharif 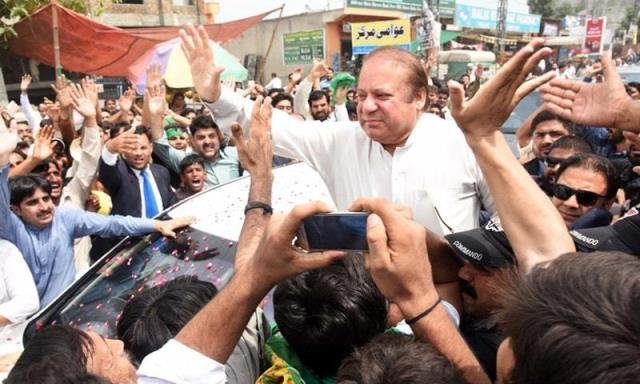 In an informal conversation with journalists on Saturday, former prime minister Nawaz Sharif said that though he has a lot to say on the circumstances surrounding his ouster, he wishes to remain silent for now.

He had arrived in Islamabad from Murree, where he had been staying since his ouster from Prime Minister House last week. He had been disqualified from holding public office by the Supreme Court on July 28 in its verdict on the Panama Papers case for failing to declare a receivable salary as an asset.

He was welcomed by scores of his followers on his arrival in the capital.

“How could I declare a salary I never received from my son’s company?” he asked journalists on Saturday.

The former premier also insisted that no evidence of corruption could be found against him despite the investigation of his father’s company records.

Warning that there will be a state of anarchy in the country if it “did not walk on the right path”, Sharif said Pakistan is right now on its way to prosperity and will continue to grow.

The thrice-deposed premier also stressed the need for a political consensus. He emphasised the need for unity amongst political parties and recalled that he had accepted the PPP’s mandate in Sindh after the 2013 elections.

“Even during anti-government protests and sit-ins [led by the Pakistan Tehreek-i-Insaf], we never took an offensive stance,” he recalled.

Commenting on former president Pervez Musharraf’s recent remarks in an interview to BBC Urdu, Sharif challenged him to return to Pakistan. Musharraf, who is facing a treason trial for imposing a state of emergency in the country on Nov 3, 2007, had said that dictatorships had a better track record compared to democracy in Pakistan.

“Musharraf wanted to sign the NRO (National Reconciliation Ordinance) with me,” Sharif claimed. He also claimed that he was told to meet Musharraf, ostensibly to strike a deal, several times; instead, he signed the Charter of Democracy with the late Benazir Bhutto.

Sharif said that his expulsion from the country after Musharraf’s coup in 1999 was a trial for him, but had also taught him a lot. He added that it was important to learn from one’s mistakes, but it seemed that the country had learned nothing from the 1971 secession of Bangladesh.

He also asked whether the courts could ever hold a dictator accountable for his actions, noting that no one has so far been held responsible for the “murder” of Nawab Akbar Bugti.

He was slated to address a rally in Lahore on Sunday, but has reportedly changed his initial plan of heading to Lahore via the Motorway on Sunday and will instead take the GT Road on Wednesday.

Sharif, who reportedly changed his plans on the insistence of his party cadre, is expected to address PML-N workers and supporters in cities along the GT Road as he makes his way to his home turf.