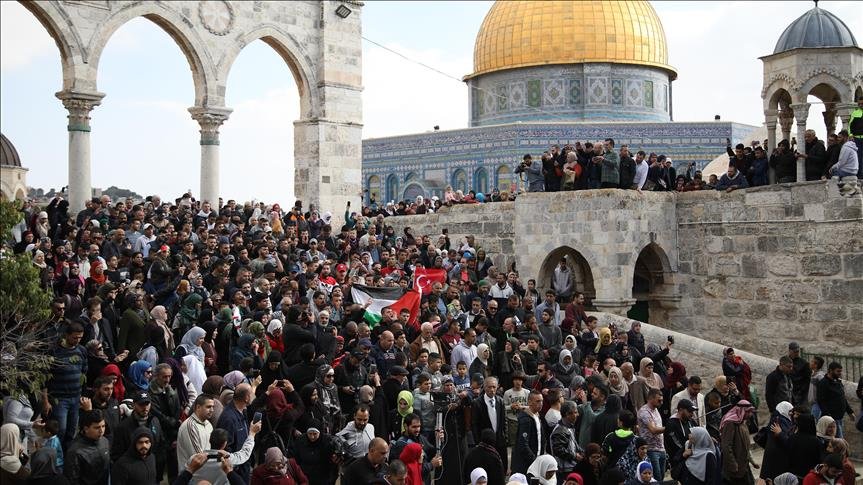 “Demonstrators marched from the Al-Aqsa Masjid to the Bab al-Amoud [also known as the Damascus Gate], shouting slogans against the U.S. move and reiterating Jerusalem’s Arab and Muslim identity,” he said.

At least four Palestinians have been martyred and hundreds more injured in clashes with Israeli forces — and at least one alleged airstrike — since Trump announced the decision last Wednesday.

The dramatic shift in U.S. policy has drawn a storm of condemnation and protest across the Arab and Muslim world.

An extraordinary Organization of Islamic Cooperation summit in Istanbul and final declaration of East Jerusalem as Palestine’s capital came in response to Trump’s decision to recognize Jerusalem as Israel’s capital and relocate Washington’s embassy from Tel Aviv to Jerusalem.

Jerusalem remains at the heart of the Israel-Palestine conflict, with Palestinians hoping that East Jerusalem — occupied by Israel since 1967 — might eventually serve as the capital of a Palestinian state.

In April, Russia recognized West Jerusalem as Israel’s capital, voicing hope that the city’s eastern half might eventually serve as the capital of an independent state of Palestine.

Notably, in his announcement last week, Trump stressed that the “specific boundaries of Israeli sovereignty in Jerusalem” should be decided in final-status talks between the two sides.