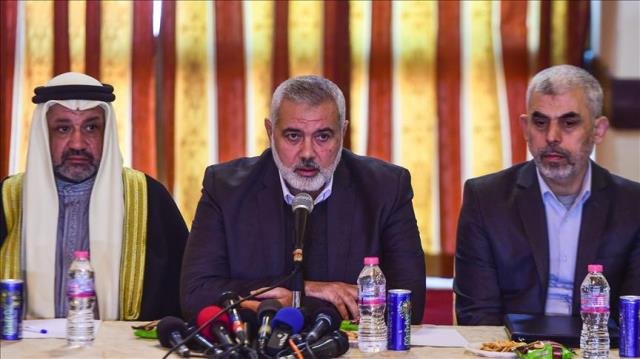 “The recent U.S. decision on Jerusalem is part of ongoing efforts to terminate the Palestinian cause within the context of a so-called ‘deal of the century’,” Haniyeh said at a meeting in Gaza City with Palestinian tribal leaders.

On Dec. 6, Trump announced his decision to recognize Jerusalem as Israel’s capital, drawing condemnation and protest from across the Arab and Muslim world.

The controversial U.S. move, Haniyeh said, “has implications for the reconfiguration of the entire region and the [Arab and Muslim] nation… which will come at the expense of Jerusalem and Palestinian rights.”

Hamas, he added, had received information of a U.S. plan to offer Palestinian leaders a state with its capital in Abu Dis, a Palestinian village near East Jerusalem.

“The plan involves building a bridge linking Abu Dis to the Al-Aqsa Mosque compound [in East Jerusalem] with the ostensible aim of ensuring [Palestinians] access to the mosque,” Haniyeh asserted.

He added: “There is also a talk of dividing the Al-Aqsa Mosque compound into three separate parts.”

The Hamas leader went on to say there was “movement afoot in the region” aimed at creating a “political entity in the Gaza Strip endowed with certain privileges”. He did not elaborate further.

Jerusalem remains at the heart of the Middle East conflict, with Palestinians hoping that East Jerusalem — occupied by Israel since 1967 — might eventually serve as the capital of an independent Palestinian state.