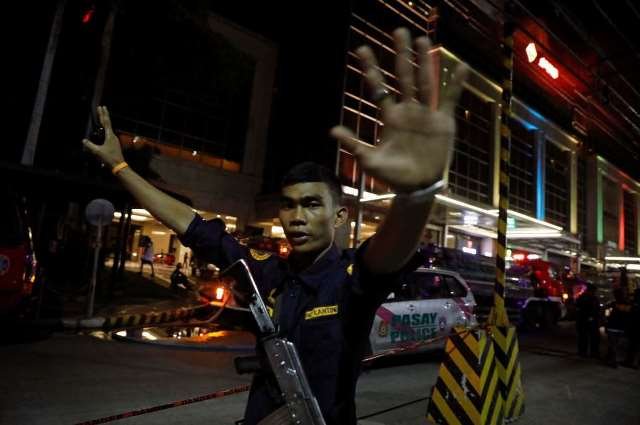 A gunman stormed a casino in the Philippine capital on Friday, setting gaming tables alight and killing at least 36 people who mostly suffocated in thick smoke, in an attack claimed by Islamic State but which officials insist was a botched robbery.

The gunman killed himself in a hotel room after being shot and wounded by security officers at the Resorts World Manila entertainment complex, police said. A second “person of interest” who was in the casino at the time was cooperating with the investigation, police said.

Most of the dead suffocated in the chaos. Many guests and staff had tried to hide from the gunfire rather than leave the building when the attack began shortly after midnight (1600 GMT) and fell victim to the smoke, the fire bureau said.

But that was quickly rejected by National Security Adviser Hermogenes Esperon, who said all the evidence pointed to an attempt to steal casino chips. Police said they were not looking at other motives, although security in the capital had been beefed up.

“This is plain and simple propaganda,” Esperon told Reuters. “If the lone gunman was really an IS terrorist, why did he not shoot and kill people in the casino? He only went for the casino chips.”

The IS claim, which came nearly 24 hours after the attack, also contradicted a statement from Ernesto Abella, a spokesman for President Rodrigo Duterte, who said there was no evidence linking it to fighting between government troops and Islamist militants in the country’s south.

“All indications point to a criminal act by an apparently emotionally disturbed individual,” Abella told a news conference. “Although the perpetrator gave warning shots, there apparently was no indication that he wanted to do harm or shoot anyone.”

Oscar Albayalde, chief of the capital’s police office, said those who died were in the casino’s main gaming area.

“What caused their deaths is the thick smoke,” he told reporters. “The room was carpeted and of course the tables, highly combustible.”

At dawn, the body of the suspected gunman was found in a hotel room in the smoldering complex, which is close to Manila’s airport and an air force base, police said.

“He burned himself inside hotel room 510,” national police chief Ronald dela Rosa told a news conference. “He lay down on the bed, covered himself in a thick blanket and apparently doused himself in gasoline.”

Resorts World Chief Operating Officer Stephen Reilly said casino guards had shot and wounded the gunman – armed with what authorities described as a “baby armalite” – during the attack.

“Severe loss of blood from the gunshot wound significantly slowed down the assailant and resulted to his holing up in the room where he took his own life,” Reilly said.

Officials said at least 54 people were hurt, some seriously, as they rushed to escape what was at first believed to have been a militant attack.

Survivor Magdalena Ramos, who was a guest at the hotel, said people began shouting “ISIS! ISIS!” when the gunfire began. The 57-year-old said she hid in a kitchen and then fled when the smoke became too thick.

But police quickly said they did not believe the attacker had any militant connections.

Otso Iho, a senior analyst at Jane’s Terrorism and Insurgency Centre, said several aspects of the attack, including that the gunman fired in the air and his method of suicide, were unusual for an Islamist attack, and potentially undermined the IS claim.

Earlier reports said the gunman may have been white, but police later said he appeared to be Filipino, although they were still establishing his nationality.

Kimberly Molitas, a spokeswoman for the capital’s police office, said 113 million pesos ($2.27 million) worth of casino chips stolen during the raid had been recovered.

“Even the security personnel panicked,” casino guest Jeff Santos told a radio station. “Definitely, us patrons, we did not expect that, everyone ran away.”

Jeri Ann Santiago, who works in the emergency room at the San Juan de Dios hospital, said patients were suffering from smoke inhalation and some had fractures. None had gunshot wounds, she said.

The Philippines has been on heightened alert amid a crisis in the south of the country, where troops have been battling Islamist rebels since May 23.

Duterte declared martial law on the southern island of Mindanao last week and has warned it could become a haven for Islamic State supporters fleeing Iraq and Syria.

Security was tightened around the presidential palace on Friday, with armored personnel carriers stationed on approach roads and river ferries barred from passing close by.

Taiwan’s foreign ministry said four people from Taiwan were among those killed, and South Korea said one of its citizens had died, apparently after a heart attack.