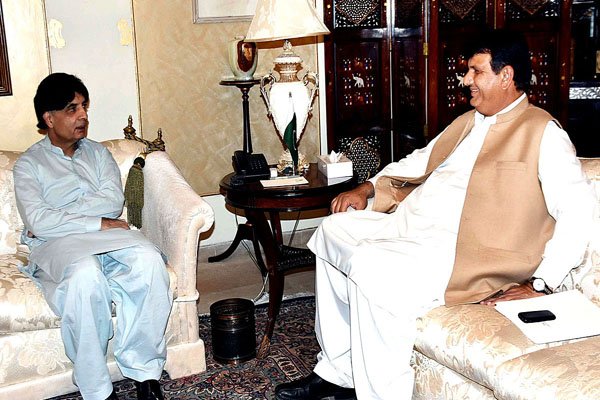 Minister for Interior, Chaudhry Nisar Ali Khan Friday said reforms and decision regarding merger of Federally Administered Tribal Areas (FATA) into Khyber Pakhtunkhwa (KP) was an achievement of present government and it
would be taken to its logical conclusion.

He was talking to Advisor to Prime Minister and Provincial President of Pakistan Muslim League-Nawaz (PML-N), Engr Ameer Muqam, who called on him here.

The minister said maintenance of law and order in KP and socio-economic development of people were among the foremost priorities of government. He said efforts and role of federal government for past four years towards security of the province, political stability and development is a clear manifestation that journey to development can only be ensured through practical steps and not through mere slogans and claims.

The two leaders discussed overall situation of the country, especially the politics in KP, development projects in province and FATA reforms.

Chaudhry Nisar underlined need for proactive role of party workers towards highlighting and resolution of real issues of people of the province.

The minister said he would visit Peshawar in next few days and future strategy would be formulated in consultation with party leadership.