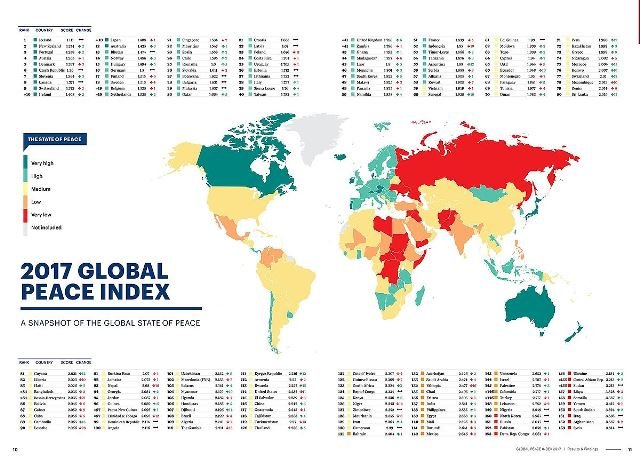 The State of Qatar topped the Middle East and North African (MENA) region in Global Peace Index (GPI) in 2017 for the ninth year in a row. Qatar retained first place among the Arab countries and placed 30th on global level among 163 countries.

Qatar has maintained its first ranking in the Middle East and North Africa during the past years (2009 – 2017) and has been ranked best internationally in the same period by achieving high rates of evaluation that outshined many developed countries.

The report, issued by the London Institute for Economics and Peace in collaboration with the Center for Peace and Conflict Studies at the University of Sydney has listed Qatar as the only country in the Middle East and North Africa region among the 50 most secure countries in the world. This reflects Qatar’s global security status, which is consistent with Qatar National Vision 2030 and the Ministry of Interior’s strategy to enhance security and security at the state level.

According to the report Qatar has maintained its high score in many indicators like low crime rates, low murder rates, low prison numbers, stable political conditions and a society free of terrorism, good international relations and non-appearance of internal or external threats or conflicts.

The State of Qatar has been ranked first in the Middle East and North Africa countries from 2009 to 2017.

The World Peace Index is based on a set of criteria that comprise several aspects, including the internal and external affairs of countries such as political stability, the extent of crime in society, the level of respect for human rights, terrorist crimes on the territory of the State, the extent of participation in support of peacekeeping forces, the military capabilities of the State, the spread of corruption and the available space for freedom of information and participation of women in public life and political life and the extent of health care provided to the people and education opportunities, etc.

The Global Peace Index is an attempt to measure the relative peace status of countries and regions. It is produced by the Institute for Economics and Peace, in consultation with an international team of peace experts, institutes and research centers in collaboration with the Center for Peace and Conflict Studies at the University of Sydney, Australia.

Countries are ranked on a scale of 1-5 degrees so that the most stable country is 1 and the least stable is 5.
Qatar’s high ranking in the report for the last nine years confirms its superiority in many international reports and indicators during the last period, most notably the index of the safest and most peaceful countries in the world that placed Qatar second globally and the first among Arab countries, the Global Competitiveness Index (18th globally and the second among Arab countries), and the Arab Economic Competitiveness Index (First in Arab).

In 2017, Qatar scored 99.1% in applying the guidelines of annex 17 on Safeguarding International Civil Aviation against Acts of Unlawful Interference.

Qatar also scored 96.76% in implementing safety management and a 100% in annex nine on facilitation.

In addition, Qatar was ranked first in the Arab world and 33 globally in the Human Development Report 2016 of the United Nations Development Program.