Friends Should Not Deceive Each Other: Erdogan tells US, Leaves for Saudi Arabia on Gulf Crisis 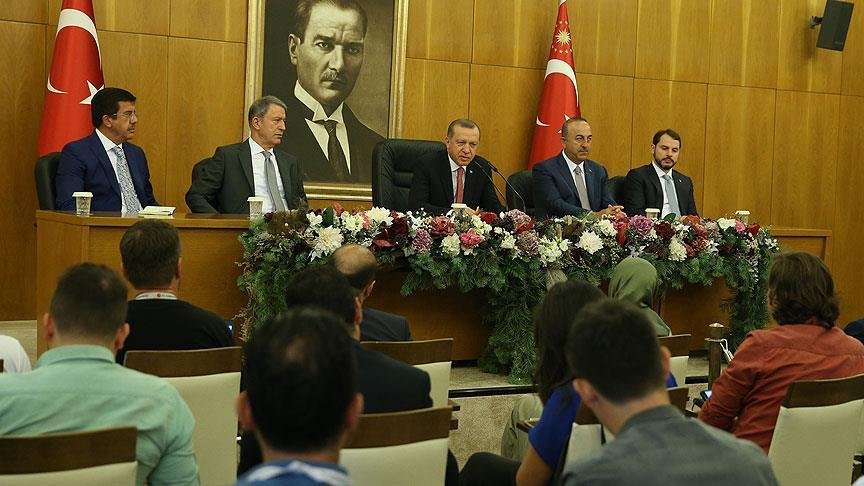 Turkish president said Sunday that friends should not deceive other, referring to recent remarks made by a US general over change of PKK/PYD’s name to Syrian Democratic Forces.

The head of U.S. special forces Army Gen. Raymond Thomas said Friday that rebranding to Syrian Democratic Forces was done to give PKK/PYD a voice in Syria talks and to assuage Ankara.

“We know who is who very well. Both are the same. […] What really matters is not changing the name plate, but what is inside,” Erdogan said during a press conference at Istanbul’s Ataturk Airport before departing for Saudi Arabia as part of his two-day Gulf tour.

Erdogan said Turkey will not buy the name change of PKK/PYD to Syrian Democratic Forces.

“Friends do not deceive each other,” Erdogan stressed, referring to the U.S.

The U.S. has supported the PKK/PYD along with several other Arab militia groups under the umbrella of the SDF, long vexing Ankara.

The U.S. views the SDF as a “reliable partner” in its fight against Daesh and continues to provide it with arms and equipment against strong objection by Turkey that views the PKK/PYD as the Syrian offshoot of the PKK terror group.

The PKK has waged a terror campaign against Turkey for more than 30 years that has led to the deaths of more than 40,000 people. It is a designated terror group in Turkey, the U.S. and EU.

He also commented on recent tension in Turkish-German relations. Ties between Ankara and Berlin have been strained in recent months as Turkish leaders slammed Germany for turning a blind eye to the activities of outlawed groups and terrorist organizations hostile to Turkey.

Moreover, a Turkish court had ruled on Tuesday that six suspects, including German national Peter Steudtner and Amnesty International Turkey Director Idil Eser, would be remanded in custody, while the four others were released.

The suspects were allegedly planning provocative events meant to fuel unrest across Turkey similar to the 2013 Gezi Park protests.

Erdogan said Turkey will do anything possible against those who are involved in provocative acts in Turkey and even try to continue these via their diplomatic services.

“Nobody has right to interfere domestic affairs of Turkey,” Erdogan emphasized.

He also said that many Fetullah Terrorist Organisation (FETO) members are moving freely in Germany.

“The names of those were already given [to Germany],” Erdogan said.

He added that Germany does not extradite these FETO members although there is extradition agreement between Turkey and Germany.

The Fetullah Terrorist Organization (FETO), which organized the defeated coup bid in Turkey last year that martyred 250 people, has a large network in Germany, which is home to more than 3 million Turkish immigrants.