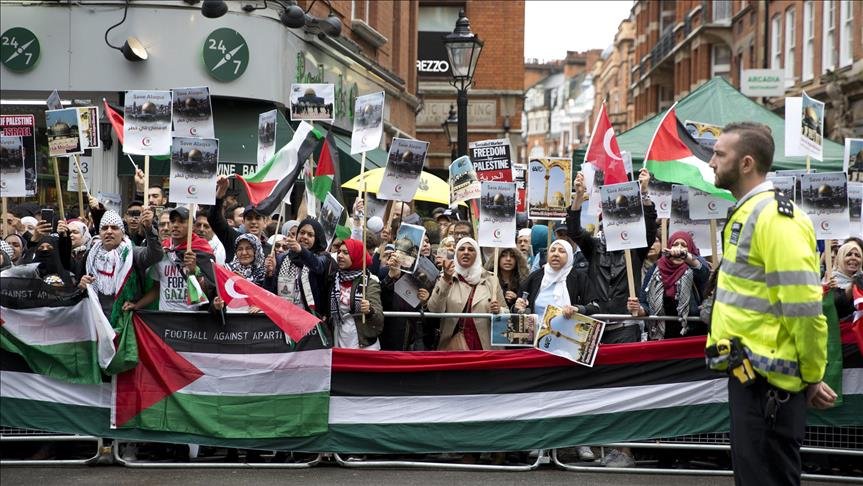 Hundreds of British Palestinians staged a protest in front of Israel’s London embassy against the latest restrictions around the Muslims’ third holiest site in Jerusalem on Saturday.

The emergency protest called for by the Palestinian Forum in Britain saw protesters from all ages, and organizers said they held the protest to attract attention to Israel’s aggression in Jerusalem.

Some protesters held placards read “Save Al-Aqsa” and “Free Palestine” and some others shouted anti-Israeli slogans.

“Israel is a terror state”, and “Hands-off Al-Aqsa”, the group shouted.

A small pro-Israeli group also gathered in front of the embassy, however, British police directed them to the back of the building when tensions between the groups raised.

Anger has spilled over across the West Bank since last week when Israel shut the Al-Aqsa Mosque, revered by both Muslims and Jews, who call it Temple Mount, following a deadly shootout.

The mosque was reopened after a two-day closure, with Israel installing metal detectors at the mosque gates, which Palestinians say aim to change the status quo — a delicate balance of prayer and visiting rights.

Israel, for its part, refused to remove the detectors, claiming the security measures were similar to procedures taken at other holy sites around the world.

Sacred to Muslims, Jews, and Christians, Jerusalem is home to the Al-Aqsa Mosque, which for Muslims represents the world’s third-holiest site.

At least three Palestinians have been killed since Friday clashes.

Meanwhile, another group of protesters also gathered to condemn Israel’s latest restrictions in Al-Aqsa Mosque compound and the latest killing in Northern Ireland’s Londonderry city. The protesters urged Israel to end the aggression in Jerusalem.

In Berlin, hundreds of people, including Turks, protested against the latest restrictions on Muslims’ access to Al-Aqsa Mosque late Saturday.

Shouting slogans at Potsdamer Platz Square, protesters carried banners showing Al-Aqsa Mosque, saying “I am a part of this.”

In Geneva, a 500-strong group held protests against Israel outside UN’s Geneva office as well.

Despite the rain, the protests lasted for two hours, calling Israel to immediately stop its practices against the holy mosque.