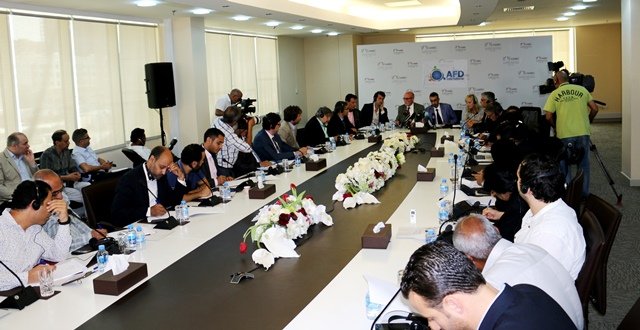 A group of 17 European lawyers, doctors and journalists called on the siege countries to lift the blocked immediately. They also asked to protect the dignity of those families suffering due to already 45 days long blocked by providing immediate financial help to meet their day today immediate basic needs.

Headed by Abdelmanjid Mrari, Director of AFD International for MENA Region, 17 members of visiting delegation are from different countries including Spain, Italy, Belgium, France, Holland and United Kingdom. They met around 45 families and effected people to know the repercussions from the 45 days long blockade of Qatar led by Saudi Arabia. They added that the visit of independent experts to Qatar was aimed at gauging the nature and severity of the violations.

Addressing a press conference in Doha, members of the delegation expressed their serious observations arised from blocked severe effects especially on women and children, right to education, health, family reunification and on business community.

Members of the delegation stressed on Saudi led blocked countries to compensate those affected, reunite families, and allow students to complete their education, and to deliver certificates to those who finished their studies, and to solve all the problems in accordance with the provisions of international laws and national constitutions.

Addressing to a press conference in Doha, members of the delegation regarded Qatar blocked as unjust, in violation of international laws, the UN Charter and human dignity. They expressed about the great damages effected people have suffered along with mental torture because of the blockade. They stressed on blocked countries not to involve civilians in political differences.

They told to media that all these cases will be documented in a report to be submitted to European Parliament, UN Human Rights Council. They also told that they will be examining the possibility of filing complaints to countries involved as per the universal jurisdiction.

Abdelmajid Mrari, Head of delegation also told that the delegation has tried to contact three blockading countries in order to visit them and to listen their views, but have not receive any response from these countries. However, he will continue to communicate with them.

Francois Burgat, Director, of Research, Arab World Institute in France, criticized the blockade on Qatar and the harm it has done to states and individuals, especially families. Burgat considered the blockade as unacceptable as it affected negatively the relations between families and caused health and social problems for women, children and the elderly.

Isa Gultaslar, a lawyer and specialized in human rights issues, said that the cases are being analysed in accordance with the law and recognized international standards. He said that the delegation found that all the measures taken by the siege countries were arbitrary and lacked any legal support and did not take human rights into account. The delegation also found that these measures were taken on personal whims and will lead to grave consequences.

Mairead Tagg, a psychologist from the UK, noted that some are suffering from depression, particularly children and women as a result of the separation from the families, she was referring to the mental difficulties members of certain families were found suffering.

Visiting European delegation also aimed at communicating with members of the civil society in Qatar and obtaining reports and discussing with witnesses the humanitarian conditions resulting from the siege.

The delegation showed its concern on blocked countries pressure to close down ‘Al Jazeera Network’ in carrying out its right to freedom of speech and protect its staff in their right to carry out their jobs as journalists.