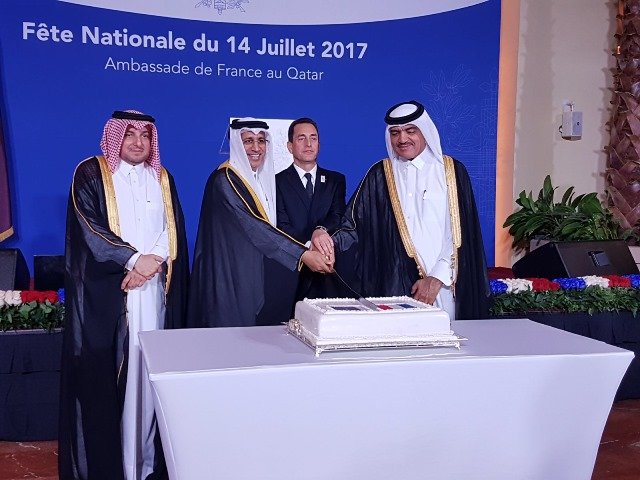 “France urges all parties involved in the Gulf crisis to initiate dialogue in order to de-escalate the crisis by lifting ongoing sanctions on Qatar by its gulf neighbors so as to spare Qatari from the negative effects of the blockade,” French envoy to State of Qatar Eric Chavellier said today evening addressing on the occasion of French National Day reception hosted at Hotel Ritz Carlton Doha.

French envoy to Qatar said ‘ France is making relentless efforts favouring Kuwaiti mediation in order to promote a diplomatic solution to the crisis. French president Emmanuel Macron, has himself talked on phone five times with the Emir since the beginning of this crisis.”

He said “My thoughts go, especially but not exclusively, to binational families, suddenly and brutally torn apart and to students who had to stop their education overnight, and to those who lost their jobs.”

According to Chevallier, we will continue to work for the reinforcement of our bilateral ties with Qatar in all domains such as strategic, security and defence related challenges including those pertaining to the fight against terrorism and its financing.

He told that in line with the relentless French efforts to end the crisis, French Minister of Foreign Affairs
Jean-Yves Le Drian, will hold talks with the Emir of State of Qatar, Sheikh Tamim bin Hamad al Thani in Doha on Saturday.

In his address on the occasion of his country’s national day, ambassador Eric Chavellier said that both Qatar and France are major economic partners and this partnership was once again clearly demonstrated during the recent signing of the agreement between Total and Qatar Petroleum for the co-exploration of Al-Shaheen Oil Field which has taken effect as of 14th July 2017.”