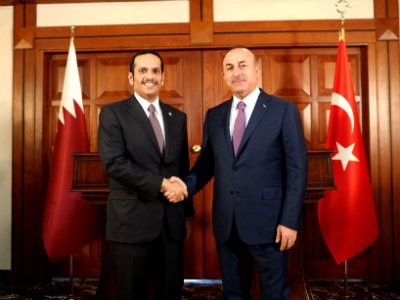 Gulf State demands which include the closure of a Turkish military base in Qatar are “unacceptable,” Ankara’s foreign minister said on Friday.

Since June 5, Qatar has been under a blockade by several Arab countries — including Saudi Arabia, the United Arab Emirates, Egypt, Bahrain and Yemen — accusing Doha of supporting terrorism.

The Qatari government has denied all the accusations, blasting the blockade as “unjustified” and a violation of international law.

On demands for closure of the Turkish military base in Qatar, Cavusoglu cited the U.S. military base there, saying: “There is no such dispute with the Americans, nor do they object to it. This [Turkish base] is a deal between two sovereign countries. The Gulf demands violate sovereignty.”

He described a recent Qatari deal with the U.S. as “prudent” and said: “It shows that they are open to dialogue”.

Qatar and the U.S. signed a deal to combat the financing of terrorism, during a visit to Doha by U.S. Secretary of State Rex Tillerson on Tuesday, a move that comes as the Gulf crisis continues in the region.

Cavusoglu highlighted Qatar’s support through the first anniversary of the defeated 2016 coup attempt in Turkey:

“There was a traitorous coup attempt last year on July 15.

“That night, even before the outcome of the attempt was clear, Qatari Emir Tamim bin Hamad Al Thani called our president, Recep Tayyip Erdogan, to show Qatar’s and his own support.

“Turkey will never forget this. While we commemorate our martyrs on this anniversary, hosting my brother Mohammad [Al Thani] is all the more meaningful.”

Cavusoglu said President Erdogan was planning to visit the Gulf States and said details would become claeer next week.

Foreign Minister Al Thani, for his part, said the Turkish military base in Qatar is based on deals between two countries and that no other country has the right to argue or appeal it.

“The first reason for my visit is the anniversary of the treacherous coup attempt last year,” followed by thanking Turkey for supporting Qatar, said Al Thani.

“As you know, our country has been facing an illegal blockade. We would like to thank the Turkish Republic, the Turkish president, and the foreign minister on behalf of the Qatar state and government.”

“If a military agreement Qatar is to sign does not violate any international laws, then it can never even be up for debate. Since there is a legitimate agreement [between Turkey and Qatar], no state has the right to argue or appeal it,” he added.

Al Thani said the blockade on Qatar has no legitimate basis.

“We want the countries implementing this blockade to communicate their complaints on a solid basis. Qatar is also battling terrorism like these countries supporting counter-terrorism,” he said.

“Although it’s now been 40 days since the blockade, no evidence has been presented to prove the allegations,” Al Thani said, adding: “Qatar supports constructive dialogue to resolve the crisis.”