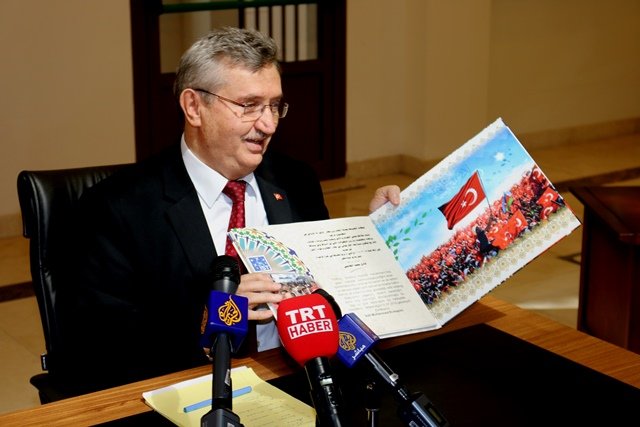 Turkish ambassador to Qatar Fikret Ozer said in Doha “We are commemorating the memories of our martyrs who sacrificed their lives last year same day to fight for their rights and saving the country from derailing the democracy. He said that 249 Turkish citizens were killed and around 2000 injured. ‘We will never forget those who have lost their lives for democracy and the salvation of our nation.’

Turkish envoy to Qatar was addressing a press conference in embassy premises in Doha to announce events organised related to the completion of the one year of the failed coup attempt of 15th July 2016 against Turkish government . He said that ‘we will continue our efforts since we are committed to bring peace in our country as well as in the Gulf region since it of great important for us.’

In regards to on-going Gulf crisis, Turkish ambassador reaffirmed Turkish support to Qatar. He said that Turkey will keep sending supplies of food stuff by sea and air amid imposed blockade on Qatar by its neighboring gulf countries.

Ambassador Ozer announced that Turkish President Recep Tayyip Erdogan is scheduled to visit Saudi Arabia, Kuwait and Qatar between 18-20 August 2017 as part of his efforts to de-accelerate gulf crisis and to promote peace between the three brotherly countries.

He told that to commemorate the sacrifice and support of Turkish citizen in their effort to thwart the coup attempt on 15th July 2016, a picture exhibition is organised at the Yunus Emre Turkish Cultural Centre in Doha for public viewing.

It is to remind that last year on Friday July 15, a group of Turkish defence forces associated with the Fetullah Terrorist Organisation (FETO) launched a coup attempt by attacking on General Staff Headquarters and other vital institutions, however, it was suppressed after almost 22 hours.

A documentary made from compiling of various mobile video recordings and still pictures during last year failed coup attempt was shown at the end of the press conference.