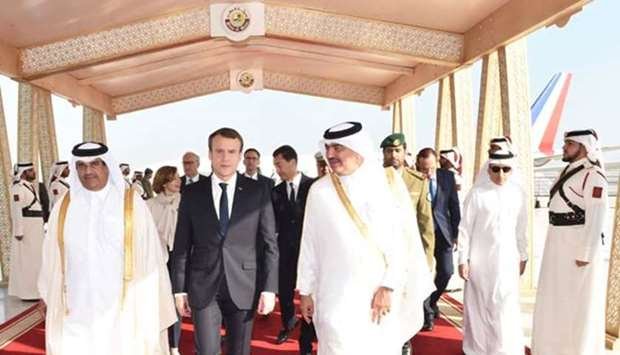 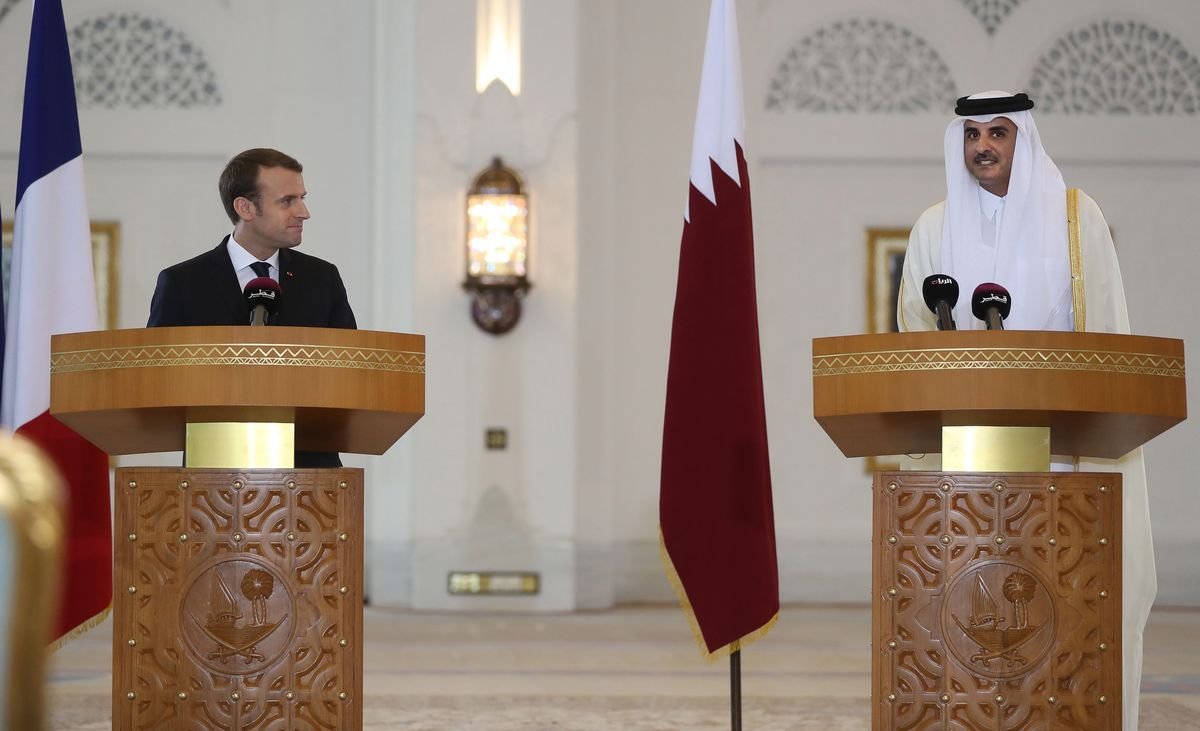 France and Qatar signed a slew of contracts as President Emmanuel Macron arrives in Qatar to solidify French business interests and Qatar continues to firm up its ties with the West.

the French national railway company SNCF along with Paris metro company RATP won a contract to run the Doha metro;

“These contracts underline the closeness of our commercial ties,” Macron said during a signing ceremony in Doha on Thursday. He said the contracts were valued at about 12 billion euros ($14.1 billion).

Emir of Qatar, Sheikh Tamim bin Hamad Al Thani and French President Emmanuel Macron held official talks at the Emiri Diwan on Thursday morning.Present on the occasion were Sheikh Abdullah bin Hamad Al-Thani, Deputy Emir of State of Qatar, number of ministers, members of the official delegation accompanying French President.
Leaders of both the countries discussed means to enhance bilateral relations between the two countries and aspects of developing them in various fields for the interests of both countries.
They also discussed the Gulf crisis and the siege imposed on Qatar. In this context, the Emir and the French President renewed their call for a solution through dialogue and within the framework of the Kuwaiti mediation.
Moreover, the two sides exchanged views on the situation in Palestine, Syria, Yemen, Libya and Iraq as well as a number of issues of common interest.
US President Donald Trump’s decision recognizing Jerusalem as the capital of Israel and the plan to move the US Embassy from Tel Aviv to Jerusalem and its consequences for security and stability in the region were also discussed.
They also reviewed efforts of the two countries in the fight against terrorism in the framework of regional and international efforts to counter this phenomenon and dry up its financial sources and address its causes.
French President was accorded official reception on his arrival at the Emiri Diwan.
Earlier, on his arrival at Hamad Int’l Airport, he was received by Mohammed bin Abdullah Al-Rumaihi, Minister of Municipality & Environment, Qatar’s Ambassador to France Dr. Khalid bin Rashid al-Mansouri and the French Ambassador to Qatar Eric Chevallier.

After landing at Hamad Int’l Airport, he immediately went to Al-Udeid Air Base, home to some 10,000 American troops and the forward headquarters of the U.S. military’s Central Command. France also has a contingent of soldiers at the base, which is crucial to the ongoing fight against the Islamic State group in Iraq and Syria and to the war in Afghanistan.

Macron smiled and shook hands with the French and American soldiers who greeted him at the base before walking into a meeting with the base’s top commanders.

Speaking to coalition soldiers, he said the next few months of battle will determine the outcome of the war against the IS group in Iraq and Syria.

“This military win does not signify the end of the operations and the end of our battle because first we need to stabilize and win peace in Iraq and Syria,” he told troops. “Next spring is decisive in the situation in Iraq.”

Macron stressed in his remarks at the air base that France wants to avoid partition in Syria and “avoid the domination of certain international elements whose interests contradict peace.”

Doha, 25 June 2022 THE Embassy of Nepal and the Non-Resident ...
END_OF_DOCUMENT_TOKEN_TO_BE_REPLACED