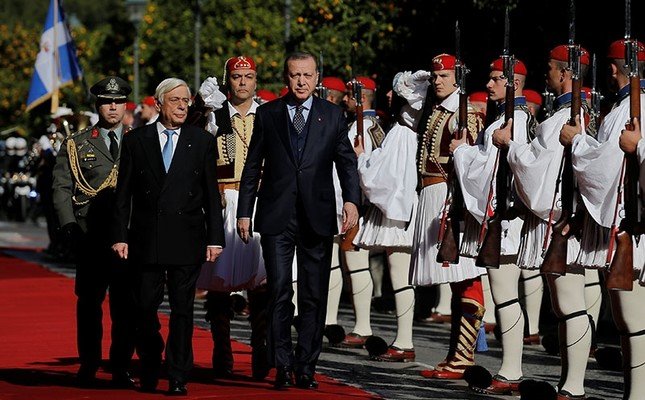 In the first official visit of a Turkish president to Greece’s capital in 65 years, President Recep Tayyip Erdoğan has taken off his gloves and caught the Greek leaders off guard by opening up a debate on the 94-year-old Treaty of Lausanne.

The debate took place live on TV when Greek President Prokopis Pavlopoulos opened up the subject during his reception of President Erdoğan, referring to an earlier interview his Turkish counterpart gave to the Greek media. In that interview, Erdoğan spoke about a debate in Greece over claims of violations of the Lausanne Treaty regarding the Aegean islands and said that Lausanne was not only about the Aegean but also covered the minority rights of Muslim Turks living in Greece, suggesting that perhaps the treaty should be revised.

When Pavlopoulos said a revision of the Treaty of Lausanne was out of question, Erdoğan insisted in front of the cameras that the treaty was not only between Turkey and Greece, but involved 11 countries, which could be changed and that it could be implemented in full and not partly.

The Treaty of Lausanne, signed on July 24, 1923, was the foundation treaty of Turkey, followed by the declaration of the republic later in the year on Oct. 29. The republic emerged after an independence war was fought against the invading Greek, British, French, Italian, Armenian and Georgian armies.

In the joint press conference, Greek Prime Minister Alexis Tsipras also said revising the treaty was out of question, and Erdoğan did not repeat his comments regarding its revision but urged the Greek leader to implement fully the minority rights of some 150,000 Muslim Turks. Inevitably, journalists asked him about the full implementation of the religious-minority rights of the Greek Orthodox minority living in Turkey. But Erdoğan had already made his point.

It wasn’t only the Greeks who were surprised by Erdoğan’s Lausanne move, Turks were too.

Erdoğan drew Turkey’s attention to the 90-year-old issue with Greece at a time when the world is occupied with another crisis: U.S. President Donald Trump’s decision to recognize Jerusalem as the capital of Israel, which Erdoğan warned about by saying the city was a “red line for Muslims.”

Today is the first Friday after Trump’s decision and millions of Muslims are expected to take to the streets across the world after Friday prayers by midday. One could expect Erdoğan to step up the tone of his reaction as a sign of putting pressure on the U.S. prior to the Islamic Cooperation Organization’s emergency meeting on Dec. 13 in Istanbul, which he called for as the term president, but instead he chose to focus on Lausanne, showing his mastery on how quick he could change the agenda.

Perhaps thanks to this maneuver he tried to maintain a degree of control over the potential anti-U.S. protests that would erupt – which should not go out of control to avoid unwanted consequences – and at the same time caught the Greeks off guard, unanticipated by them as they wanted to focus on migration cooperation and trade instead.

It seems that Erdoğan’s visit to Greece is likely to be discussed with many aspects in the near future, leaving aside the question on whether it will bring out any political results.