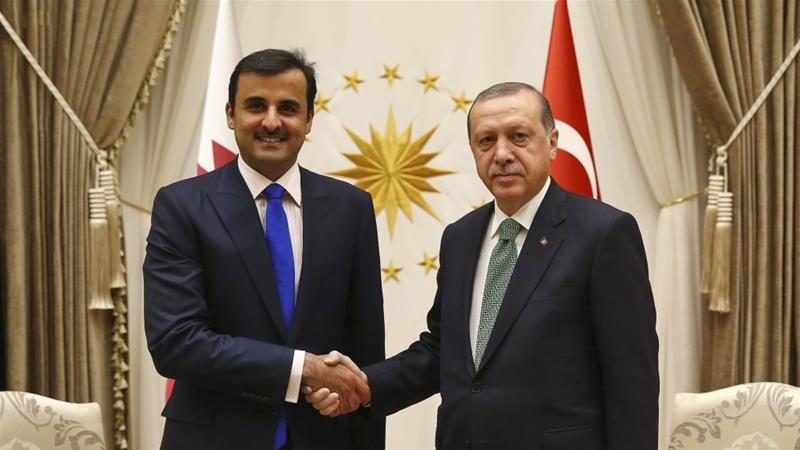 Emir of Qatar Sheikh Tamim bin Hamad al-Thani and the Turkish President Recep Tayyip Erdogan discussed the latest developments in the Gulf crisis and ways to solve it through diplomatic channels, in Ankara on Thursday.

The two leaders also discussed the most prominent regional and international events and exchanged views on them,   ‘QNA’, Qatar’s official news agency reported.

Meeting between both leaders held at the Presidential Palace in the Turkish capital, the Emir and Erdogan reviewed the close relations and prospects for their development in various fields to serve the common interests of the two friendly countries and peoples.

After visiting Turkey, the Emir left for Berlin on Thursday for talks with German Chancellor Angela Merkel which will be held on Friday. The Emir will hold talks with Merkel on the prospects of cooperation between the two friendly countries and ways to develop them, in addition to the latest regional and international developments, primarily the Gulf crisis.

Turkish president hosted a dinner in honour of Qatari ruler at the presidential palace.

Later, Emir and the accompanying delegation were seen off at Esenboga International Airport by Turkish Deputy Prime Minister for Economic Affairs Mehmet Simsek and Qatar’s Ambassador, in addition to members of the Qatari Embassy.

Ibrahim Kalin, a Turkish government spokesman told the reporters prior to the meeting with the Qatari leader and called for the Gulf nations to resolve their concerns through dialogue.

Sheikh Tamim is also scheduled to visit the Republic of France. In Paris, the Emir will meet with President Emmanuel Macron and discuss with him ways to enhance joint cooperation between the two friendly countries, in addition to the Gulf crisis and issues of common concern.

The Gulf crisis erupted after Saudi Arabia, Bahrain, the United Arab Emirates (UAE) and Egypt cut ties with Qatar accusing it of backing extremism and fostering ties with Iran on June 5.

Doha denies the claims and Ankara has insisted there is absolutely no evidence to back the allegations.

Erdogan has strongly spoken out against the sanctions applied by the Saudi-led bloc against Doha.
Erdogan in July embarked on a regional tour of the Gulf countries, with visits to Saudi Arabia, Kuwait and Qatar in a bid to defuse the crisis.

Mediation efforts led by Kuwait suffered a setback on Saturday when Saudi Arabia said it was halting all dialogue with Qatar, on the pretext that Doha misrepresented the context of a phone call between the Emir and Saudi Crown Prince Mohammed bin Salman.