Emine Erdogan Calls for End to Violence Against Rohingya Muslims 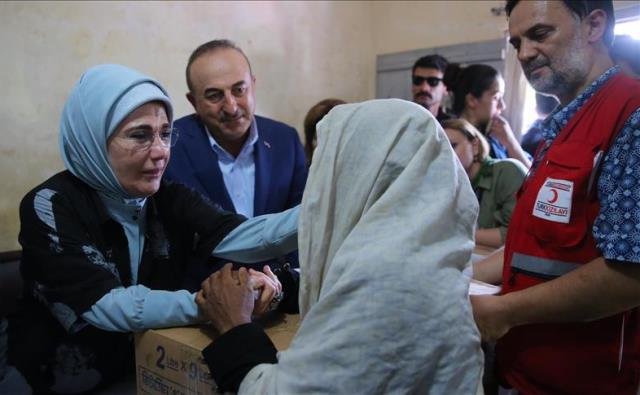 Turkey’s First Lady Emine Erdogan handed out aid to Rohingya Muslim refugees during a visit to a camp near the Myanmar border on Thursday.

“It is impossible not to be touched by this as a human being,” she said after passing boxes to desperate refugees at the camp at Kutupalong, which lies within sight of the frontier.

“I hope the world gives some thought to this subject and helps them with both humanitarian assistance and politically,”

According to the UN’s refugee agency, 164,000 Rohingya have crossed the border since Aug. 25, when Myanmar security forces launched a security operation against Rohingya militants.

However, refugees have said the crackdown had been used to mask widespread killing, looting and the burning of Rohingya villages by the military and Buddhist mobs.

Erdogan, who was accompanied by her son Bilal and Foreign Minister Mevlut Cavusoglu, called for the international community to halt the violence, which she described as an “unbelievable tragedy in this age”.

On Tuesday, Myanmar agreed to allow the Turkish Cooperation and Coordination Agency to enter Rakhine state to deliver 1,000 tons of aid.

“We want to show the world this situation here,” Cavusoglu said. “We are making efforts to stop this. We will have a meeting in Astana with the Islamic world and will have another meeting in New York, hopefully to find a permanent solution to the issue in Arakan [Rakhine].”

Turkish President Recep Tayyip Erdogan has promised to raise the plight of Rohingya at the UN General Assembly on Sept. 19.

Bangladesh, which already hosted around 400,000 Rohingya refugees, has faced a fresh influx of refugees since the security operation was launched.

Rohingya, described by the UN as the world’s most persecuted people, have faced heightened fears of attack since dozens were killed in communal violence in 2012.

Last October, following attacks on border posts in Rakhine’s Maungdaw district, Myanmar security forces launched a five-month crackdown in which, according to Rohingya groups, around 400 people were killed.

Before the fresh operation, the military had boosted its presence in Maungdaw after a wave of deadly attacks claimed by the Arakan Rohingya Salvation Army, which said it had acted in response to raids, killings and looting by soldiers.

20 January 2022 By Ashraf Siddiqui More than 7,000 books of different ...
END_OF_DOCUMENT_TOKEN_TO_BE_REPLACED