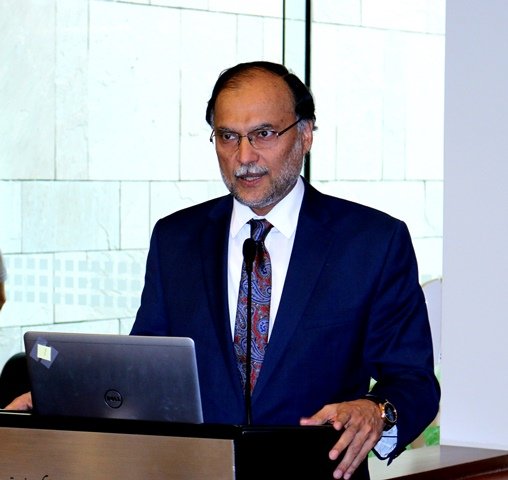 Ahsan Iqbal, Interior Minister of Pakistan was summoned by Islamabad High Court this morning of Monday where he faced barrage of questions from Justice Shaukat Aziz over the agreement signed with the Faizabad protesters.

Ahsan Iqbal was summoned by the high court in Faizabad sit-in for the last 21 days where protesters have blocked main highway of Murree Road and effecting millions of people movements.

He informed the court that an agreement has been reached with the leadership of Tehreek-i-Labaik Ya Rasool Allah Pakistan (TLYRA), who had occupied a main highway to the capital since November 6.

Chief Commissioner Islamabad read out the six-clause agreement before the court which called for resignation of Law Minister Zahid Hamid, revocation of cases against the party leaders and release of an inquiry report into the amendment of law and others.

The interior minister, Secretary Interior Arshad Mirza signed the agreement on behalf of the federal government while a senior military official Maj Gen Faiz Hamid acted as a witness to it.

On this, Justice Shaukat sought explanation from the minister over involvement of an army officer. Under which law Gen Hamid acted as a mediator, he asked.

Iqbal assured the court that the sit-in will end soon.

Justice Aziz remarked that the protesters were creating chaos in the capital for the last 21 days but there was no action, where’s ‘Raddul Fasaad’ he asked, referring to army’s operation aimed at eliminating residual / latent threat of terrorism.

Would army allow dharna near GHQ, the judge asked.

Later, the hearing was adjourned till next week. After the court appearance, Ahsan Iqbal left the venue without talking to media.