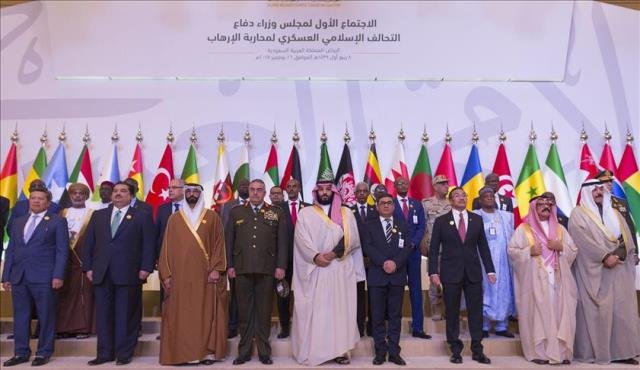 A counter-terrorist bloc of Muslim nations on Sunday stressed the ideological, communications, financing, and military fronts against terrorism during a meeting in the Saudi capital.

Convened with the participation of its 40 members at the ministerial level, the Islamic Military Counter Terrorism Coalition (IMCTC) meeting was held in Riyadh with Turkey’s National Defense Minister Nurettin Canikli in attendance.

In a final declaration released after the meeting, the coalition emphasized the importance of joint efforts, organized collective action, and comprehensive strategic planning to deal with the threat of terrorism.

The defense ministers said all possible means must be used to confront extremism and terrorism “in all their ideological notions and perceptions, to reveal their truth”.

They also highlighted the role of “education and knowledge” in directly countering terrorism.

They also highlighted the importance of correct Islamic concepts to establish the truth of moderate Islam, “which is consistent with human nature and common values.”

The ministers stressed the significance and role of the media in fighting terrorism and exposing its agenda.

“We will work with the media to counter terrorist propaganda, by destroying its foundations to reduce its influence,” the declaration said, adding that terrorists should be prevented from using the media to deliver their message.

The ministers also urged that monetary policies, legislation, and financial controls be developed to cut off the sources of terrorist financing.

Calling for increased coordination and technical and security cooperation in the exchange of data and information, the defense ministers emphasized the transfer of knowledge and expertise while fighting terrorism.

Held under the theme “Allied Against Terrorism”, Sunday’s ministerial meeting was set to discuss ways of fighting terrorism and cutting off its finances.

The 40-member bloc was launched by Saudi Arabia in late 2015 with a view to fighting terrorism. It includes countries such as Turkey, Pakistan, Malaysia and Egypt.

A declaration issued by this May’s Arab-U.S.-Islamic summit in Riyadh said the alliance member states were ready to deploy 34,000 troops to support operations against terrorist groups in Iraq and Syria.

Doha, 25 June 2022 THE Embassy of Nepal and the Non-Resident ...
END_OF_DOCUMENT_TOKEN_TO_BE_REPLACED