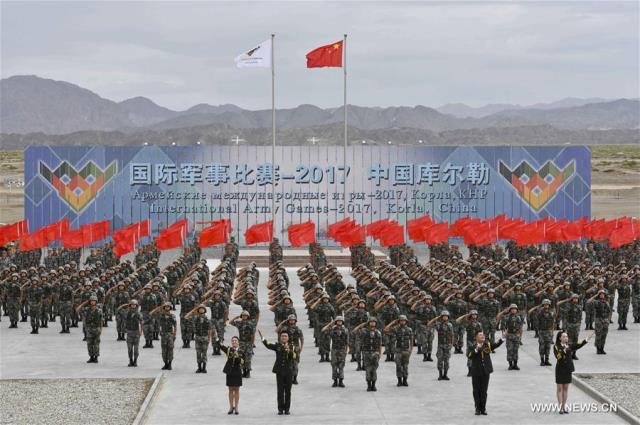 As part of a global celebration for the 90th birthday of the People’s Liberation Army (PLA), Chinese embassies in European countries recently held rounds of receptions to mark PLA’s tremendous contribution to world peace in the last 90 years.

With an attendance of thousands, the receptions across the continent offer a rare chance to the West for a better understanding of PLA’s role as world peace maintainer, public safety player and a bridge linking China with other countries.

“During its 90 years of history, the PLA has achieved very much for the Chinese people … It is (also) an instrument that’s often used to make world a better place,” said General Mikhail Kostarakos, chairman of the European Union Military Committee, at a reception co-hosted by the Chinese Mission to the EU and the Chinese Embassy in Belgium on July 20.

As China’s comprehensive national strength continues to emerge, the Chinese military has been effectively implementing its international obligations, making its own contribution to world peace.

Data released by the Chinese military authority shows that the PLA has participated in over 30 annual joint exercises in recent years, including the United Shield-2017 joint anti-terrorism drill in Belarus and the Rim of the Pacific Exercise led by the United States.

Covering non- and traditional security areas, these exercises, together with some bilateral and multilateral dialogue mechanisms, tested and improved PLA’s ability as a staunch force in maintaining world peace.
“Building a defensive military in line with the need of China’s national security and development is not only in accordance with China’s fundamental interests, but also conducive to world peace and prosperity,” Chinese Ambassador to France Zhai Jun told a reception on July 11.

Meanwhile, the Chinese army is committed to shouldering more responsibilities within its capacity to provide more public safety products for the international community.

According to a report published on the official website of the PLA, since 1990, the Chinese military has participated in 24 UN peacekeeping missions and dispatched more than 30,000 officers and soldiers to UN peacekeeping operations.

Since 2008, the Chinese military has dispatched 26 escort taskforces, involving 83 vessels and 22,000 soldiers, to carry out escort missions at the Gulf of Aden and in waters off the Somali coast.

Since 2013, the Chinese military has assigned 28 rescue teams to 14 international humanitarian assistance and disaster relief operations.

“China is a very active global actor in security building. As the number one troop contributor to United Nations missions among the five permanent Security Council members, China tangibly demonstrates its support to the international rule-based system. At the same time, it demonstrates China’s commitment to contributing to global stability,” said Kostarakos.

“The initiative announced by Chinese President Xi Jinping in September 2015 to create a standby force of 8,000 peacekeepers only underlines this noble and responsible position,” Kostarakos added.

The important role of the Chinese military in promoting bilateral relations was also hailed during these receptions.

Bilateral relations between China and Estonia have enjoyed a smooth development since Estonia’s independence in 1991, not only in business and cultural areas but also in military sector, said Helmen Kutt, chairman of the Social Affairs Committee and chairman of Estonia-China parliamentary group at the Estonian parliament.

His remarks were echoed in London. Chinese Ambassador to Britain Liu Xiaoming on Thursday told a reception that military relations are an important part of the “golden era” of China-Britain ties.

Citing the upcoming visit of the Chinese naval fleet, which is currently in an escorting mission in the Gulf of Aden, as an example, Liu said the friendly visit to Britain’s Portsmouth would enhance understanding and friendship between Chinese and British militaries, thus injecting a fresh impetus into the development of their relations.