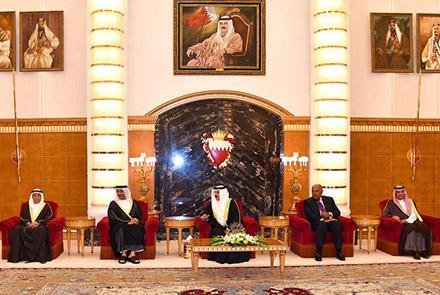 The Ministers of Foreign Affairs of the Kingdom of Saudi Arabia, the Kingdom of Bahrain, the United Arab Emirates and the Arab Republic of Egypt held a meeting here today that comes within the framework of ongoing consultation on Qatar crisis as well as the need that Qatar should stop supporting and financing terrorism, providing safe haven for criminals wanted in their countries and those involved in terrorism, disseminating hate rhetoric and interfering in the affairs of the region’s countries.

In a statement issued following their meeting today, the ministers expressed appreciation of Bahrain’s King Hamad bin Isa Al Khalifa for the reception he held for them during which he briefed them on his wise vision that aim at achieving common Arab interests and keeping close solidarity among the four countries.

The Ministers reviewed the latest developments regarding Qatar crisis as well as the contacts they made regionally and internationally in this regard. The ministers stressed the continued close coordination to enhance solidarity among the four countries, support Arab national security and eradicate terrorism in order to preserve regional and international peace and security.

The four countries reaffirmed the six principles that were announced during Cairo meeting, which represent the international consensus on fighting terrorism and extremism and their financing in addition to rejecting interference in the affairs of other countries that is contrary to international laws.

They also stressed the importance of implementing Riyadh agreements (2013-2014) which have not been implemented by Qatar.

The four countries also stressed the importance of Qatar’s response to the 13 demands made by the four countries, which will enhance countering terrorism and extremism in a way that achieves security in the region and the world.

The four countries expressed their willingness to engage in a dialogue with Qatar, provided that Qatar declares its sincere and practical desire to stop supporting and financing terrorism and extremism, disseminating hate rhetoric and interfering in the affairs of other countries, as well as to implement the 13 demands that ensure peace and stability in the region and the world.

The four countries also stressed that all procedures taken against Qatar are acts of sovereignty and in conformity with the international law.

The four countries denounced the deliberate act of Qatari authorities to obstruct the performance of Hajj rituals by Qatari nationals, commending the continued facilitation provided by the Government of the Custodian of the Two Holy Mosques to receive pilgrims.