China Claims India is Stirring Up Trouble in Doklam 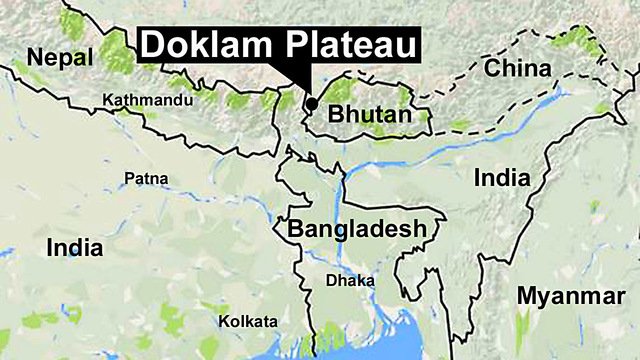 A Foreign Ministry spokesman on Friday objected to India’s attempts to stir up disputes over the Doklam region.

The Indian sides claims that, according to a 2012 India-China agreement, the tri-junction point of China, India and Bhutan will be decided by consulting with the Bhutan side, which means China and India have recognized their divergence on the issue.

Chinese Foreign Ministry spokesman Geng Shuang said the so-called tri-junction point, just as its name implies, is a point, rather than a line or an area.

He said, on the tri-junction, the Convention Between Great Britain and China Relating to Sikkim and Tibet(1890) stipulates that the Sikkim section of the China-India boundary commences at Mount Gipmochi in the east.

However, the trespass by the Indian troops took place at the Sikkim section of the China-India boundary over 2,000 meters away from Mount Gipmochi and has nothing to do with the tri-junction, said Geng.

The Indian side, by disregarding of the boundary convention, assumes the whole Doklam region as part of the tri-junction. This is obviously an attempt to confuse the public, he added.

Some opinions hold that the 1890 convention has ceased to have any significance, because the situation changed after the Sino-Indian Border Conflict in 1962.

In response to a question on whether India has recognized the delimitation of the Sikkim section of the China-India boundary since 1962, Geng said successive Indian governments had repeatedly confirmed the 1890 convention in written form, with no disagreement on the boundary alignment at the Sikkim section.

Once the border treaty was signed, its legitimacy and effectiveness was not affected by changes of governments or state systems, said Geng.

In an interview with ‘Press Trust of India’ in New Delhi on 5th July 2017, Chinese Ambassador Luo Zhaohui on Tuesday urged India to unconditionally withdraw its border troops to the Indian side of the boundary with China and seek a peaceful solution to the recent incident in the Doklam area.

Ambassador Luo said he was deeply worried by the “grave” situation in Doklam.

“It is the first time that the Indian troops have crossed the mutually recognized boundary and trespassed into China’s territory, triggering a close range face-off between Chinese and Indian border troops. Now 19 days have passed, but the situation still has not eased,” he said.

“It is the first time that such a severe situation has occurred at the Sikkim section of the China-India boundary. This section has already been delimited with clear alignment of the boundary, the two sides have consensus on it and there has been no incident over the past years,” the ambassador added.

According to Ambassador Luo, the Convention between Great Britain and China Relating to Sikkim and Tibet (1890) explicitly stipulates that Doklam undoubtedly belongs to China’s territory. After independence, India inherited this historical convention and successive Indian governments have repeatedly confirmed that in written forms, recognizing that it concurs with China on the boundary alignment at the Sikkim section.

The Chinese diplomat expounded on China’s three-point position on the situation in Doklam.

“The first one is that the Indian troops unconditionally pull back to the Indian side of the boundary. That is the precondition for any meaningful dialogue between China and India,” he said.

The second one is to seek a peaceful solution, according to the ambassador. “China attaches great importance to the China-India relations and is ready to develop a long-term stable strategic partnership for cooperation with India. The current level of cooperation and friendship between China and India are hard earned and deserve to be cherished by the two sides,” said Ambassador Luo.

He added that the third one is to maintain peace and tranquility in the border areas. “China has always taken this seriously and done a lot to this end. It needs joint efforts of the two sides. We appreciate what Prime Minister (Narendra) Modi said in St. Petersburg that over the past 50 years, not a single bullet has been fired at the India-China border areas.”

The ambassador stressed that the three top priorities are connected with each other. “Only by fulfilling the unconditional withdrawal of India’s military, can peaceful resolution of this issue be achieved. Only by approaching with peaceful resolution, can peace and tranquility of the border areas be maintained.”